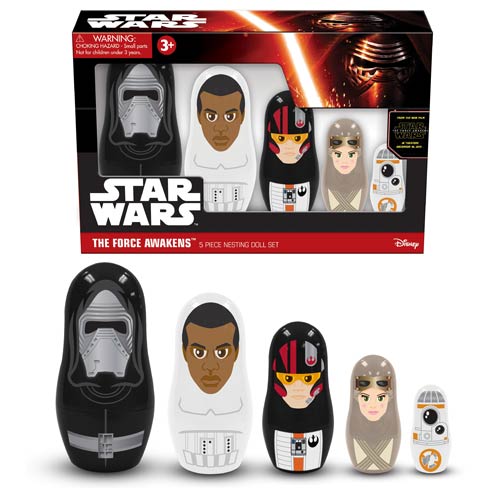 Do you hear the Force calling to you? Let it in with the Star Wars The Force Awakens Nesting Dolls.

You don’t need to train as a Jedi to let the Force in when you can just get this set of five plastic nesting dolls that include Kylo Ren, Finn, Poe Dameron, Rey, and BB-8.

You know the old story about the Dark Side and a Jedi, and now it’s time for the stories of these new characters to be told.

The Star Wars The Force Awakens Nesting Dolls will be available December 2015 but they can be pre-ordered now for $14.99 at Entertainment Earth.

The Doctors will see you now, with the Doctor Who Doctors 1-6 Nesting Dolls Set bringing you six classic Time Lords. Whovians know how it works. When the Doctor is close to death, his body regenerates, rebuilding itself from a cellular level, resulting in a […]

Avengers assemble! As in, assemble inside of each other. That’s what these Marvel Avengers Nesting Dolls are all about. Marvel’s Avengers are now nesting dolls and they look amazing. These Marvel nesting dolls include Hulk, Thor, Captain America, Iron Man, and Nick Fury. These are […]

This set of Star Wars Jabba’s Palace Nesting Dolls will look great on your desk. You get six aliens on five dolls. You get Jabba the Hutt with Salacious Crumb, a Gamorrean Guard, Max Rebo, Droopy McCool, and the singer Sy Snootles. These Return of […]

The iconic heroes of the DC Universe frequently join together to fight super villains, but the Justice League Classic Wood Nesting Dolls has them coming together in a completely different, and literal, way. Made of wood and featuring a unique mixture of hand-painted details and […]

This Halloween Nesting Dolls Set will look great in your home with your other scary decor. This set features 5 different nesting dolls that all fit into each other. You get a skeleton, 2 vampires, a cat with a pumpkin and a ghost. Scary. These […]

This set of Star Wars The Empire Nesting Dolls is perfect for your desk and features your favorite Star Wars characters. Each set includes five plastic nesting dolls. You get Darth Vader, a Stormtrooper, Boba Fett, a Royal Guard, and even the Emperor himself! They […]

Bruce Wayne lost his parents but he gained a family, captured stylishly with these Batman Family Wood Nesting Dolls. You never get a normal family get-together when the family you’re talking about includes Batman, Nightwing, Batgirl, Robin, and Alfred, but you’ll never find a more […]

Zombies are pretty scary. The only thing scarier might be Zombies within Zombies. Like if you shot one Zombie in the head and another smaller one popped up. They are hard enough to kill already! These Matryoshka Zombie Nesting Dolls each have a smaller one […]