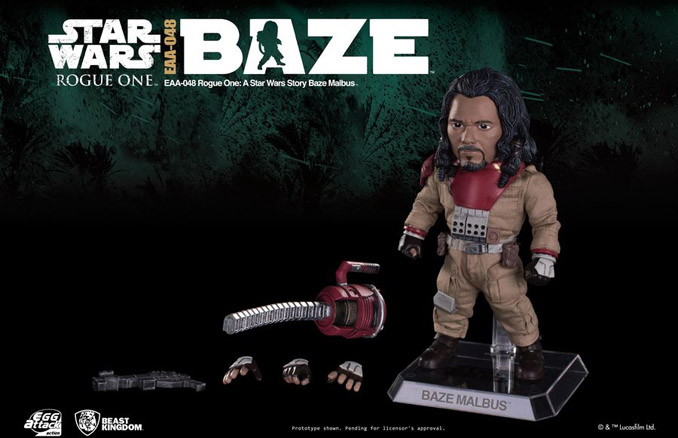 The Star Wars Rogue One Baze Malbus Egg Attack Action Figure is ready to get down to business… and business is killing Imperial Deathtroopers.

Once a Guardians of the Whills like his buddy, Chirrut Îmwe, Baze grew disillusioned while living under Imperial rule, forsaking his belief in the Force in exchange for a very big gun.

Standing 6-inches tall, with 24 points of articulation, this highly detailed figure, based on Jiang Wen’s portrayal of Baze in Rogue One, comes with a display base, a fabric costume, 3 pairs of interchangeable hands, and a repeater cannon with detachable magazine.

Available October 2017. Pre-order now for $89.99 at Entertainment Earth. The best deals on the best Rogue One: A Star Wars Story goodies can be found at Rout.com.

The Star Wars Rogue One Darth Vader Egg Attack Action Figure depicts Lord Vader as seen in the Rogue One: A Star Wars Story. He has his LED light-emitting device on the chest and familiar breathing sound too. The details are great, like the fact […]

This Star Wars Rogue One Darth Vader Egg Attack Action Figure depicts the Sith Lord as seen in Rogue One. He has his LED light-emitting device on the chest and that familiar breathing sound! The cape and vest are made with real fabrics and it […]

The Star Wars Rogue One Scarif Shoretrooper Egg Attack Action Figure is a cute version of the trooper from Rogue One. It features coastal sand equipment and an exclusive blaster pistol and rifle! This figure perfectly replicates the Shoretrooper from the movie. Shoretroopers specialize in […]

This Star Wars Rogue One Death Trooper Egg Attack Action Figure is based on the movie Rogue One: A Star Wars Story. He has a detachable tactical vest and an exclusive blaster pistol and rifle too. The details of this awesome Star Wars figure are […]