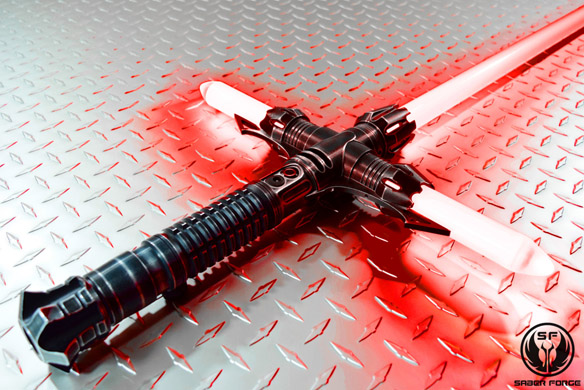 Step aside, Vader, because there’s a new Big Bad in town, and you can follow in his dark footsteps with the Star Wars Kylo Ren Lightsaber.

Star Wars fans were blown away when the first trailer for The Force Awakens was seen. It had a ton of cool moments but one of the most awesome ones was the simple shot of Kylo Ren from the back as he activated an intense lightsaber that had two small blades extending from the sides in addition to the main blade.

Now there’s only one question – are you capable of wielding a blade this awesome? 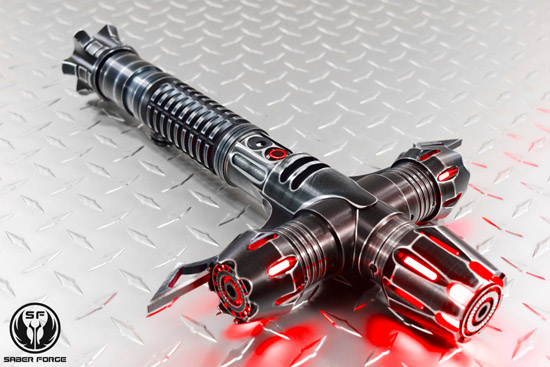 This menacing saber features a recessed AV switch, a grenade style main body, claws, and a skull buster pommel. This saber is a cross guard, which means two small side blades protect the hands in the style of a European longsword. Three custom blade plugs complete the saber’s aesthetic when blades are not installed.

After thirty years, the Dark Side has a new face, which is captured on the Star Wars The Force Awakens Kylo Ren Sixth-Scale Figure. Standing 13-inches tall and wielding his eye-catching crossguard lightsaber, Kylo Ren is ready to do battle in the name of the […]

This 2″ tall lightsaber pendant has shiny red blades with a matte black hilt. It’s the perfect way to show your allegiance to Kylo Ren. The Kylo Ren Lightsaber Necklace also makes a great gift for your fellow Star wars fans. This cross-bladed lightsaber will […]

One of the things that make this Kylo Ren Motorcycle Helmet so awesome is that it is an amazing design even if you’ve never seen the recent Star Wars movies. Let’s face it, Kylo Ren is much less iconic than Spider-Man or Iron Man. By […]

This Kylo Ren Lightsaber Room Light lets you build your own Kylo Ren lightsaber wall lamp. It has a pulsing light effect, remote control, and authentic sound effects. It is so cool, it may make you emotional. Try not to swing it around and break […]

Your morning coffee will be an awesome experience in this Star Wars Kylo Ren Heat Change Mug. This black mug shows Kylo Ren at room temperature, but when you put hot liquid in the mug, his lightsaber appears. Kylo Ren loves a good cup of […]

Ben Solo proves piloting runs in the family with the Pop! Vinyl Star Wars Last Jedi Kylo Ren in TIE Fighter. Kylo Ren found the strength he needed in the Dark Side to kill his dad but is he strong enough–evil enough–to kill his mom? […]

It figures, doesn’t it? You feel the Dark Side calling you but all you have are jeans and t-shirts. What’s an aspiring knight of Ren to do? Let the Star Wars :The Force Awakens Kylo Ren Costume Ensemble with Helmet awaken your Dark Side fashion. […]

Everyone will think you’ve joined the Knights of Ren when they see you driving around with the Star Wars The Force Awakens Kylo Ren Window Wrap Passenger Series Car Decal. Kylo Ren has Vader’s helmet, a plan, and a funky lightsaber. What he doesn’t have […]