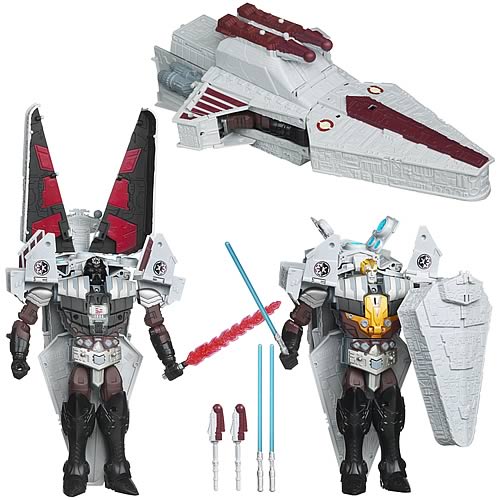 Kids get bored with toys pretty quickly. That’s why you often see them playing with the cardboard box after about a half hour. So, ideally you want toys that are several toys in one. Like this Star Wars Darth Vader Transformers Quad-Changer. It’s four toys in one.

I don’t think any other Vader toy has so many modes. You get the Star Destroyer, Republic Cruiser, Anakin Skywalker, and Darth Vader himself. This should keep you or your kid entertained for at least for an hour or two. While this toy is awesome just with the ability to switch into four modes, it also features electronic lights and sounds, plus it has weapons.

Four modes, one toy! Not much more needs to be said. Except that this awesomely geeky transforming toy is coming in June. You can pre-order it now from EntertainmentEarth for $49.99.

GeekAlerts has shown our fans many cool USB hubs in the past, but this redesigned Darth Vader USB Hub may be the best yet. With four USB 2.0 ports, you’ll have plenty of space to control all your electronics and the Darth Vader “Breath” sound […]

Embrace the power of the Dark Side… but leave enough light to see with the Star Wars Darth Vader Mood Lights. Vader always had an imposing presence in the Star Wars films but he’s never looked sharper than he does here, as long as you […]