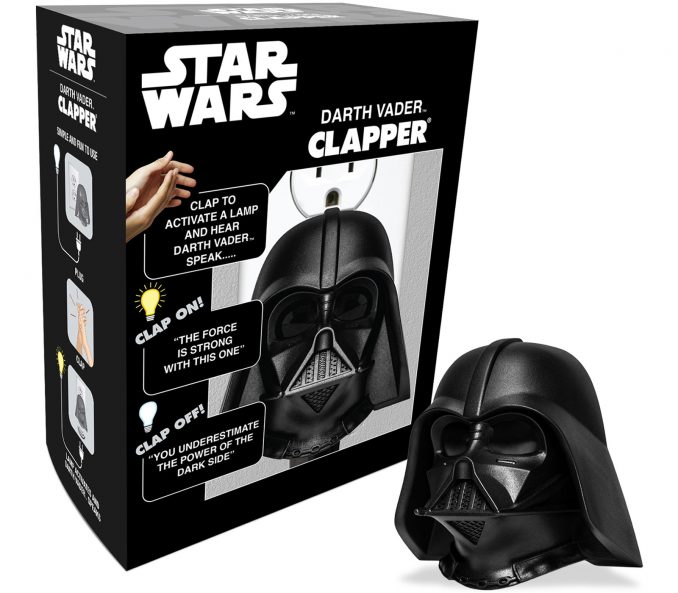 Wouldn’t it be great to have the power of the Force to turn lights on and off so you don’t have to stumble across a dark room to the switch? With the Star Wars Darth Vader Clapper, it’s possible with just the “force” of clapping your hands together.

This molded Darth Vader is about 4″ tall and plugs into standard outlets. Just plug in a lamp, appliance, or another device, and you can turn them on and off with the sound of a clap. Plus you get Darth Vader quotes when activated: “The Force is strong with this one” when you clap on and “You underestimate the power of the Dark Side” when you clap off.

The Star Wars Darth Vader Clapper allows you to clap your hands to turn on/off your lamp or other appliance and activate Darth Vader quotes!

The maker of the original “Clapper” joins Forces (pun intended) with Star Wars to bring you this innovative, useful and fun way to make your your house into a Smart House!

Let the power of The Force control your appliances! Plug any lamp, TV, or other device into your Darth Vader Clapper and turn it on and off with a simple clap of your hands. You’ll hear a Darth Vader quote each time to indicate your command has been received.

Clap on: “The Force is strong with this one.”

Purchase the Darth Vader Clapper for $29.99 at Walmart. If you prefer a more retro style “The Clapper” packaging (see the last pictures in the photo gallery above), buy it for the same price at ThinkGeek. Coming soon to Entertainment Earth.

Turn down the lights, cue up the Imperial March music and enjoy this Star Wars Darth Vader Desk Lamp. Let Vader watch over your desk and shed some light into the world for once. This lamp oozes Sith style with it’s super-deformed Star Wars body […]

GeekAlerts has shown our fans many cool USB hubs in the past, but this redesigned Darth Vader USB Hub may be the best yet. With four USB 2.0 ports, you’ll have plenty of space to control all your electronics and the Darth Vader “Breath” sound […]