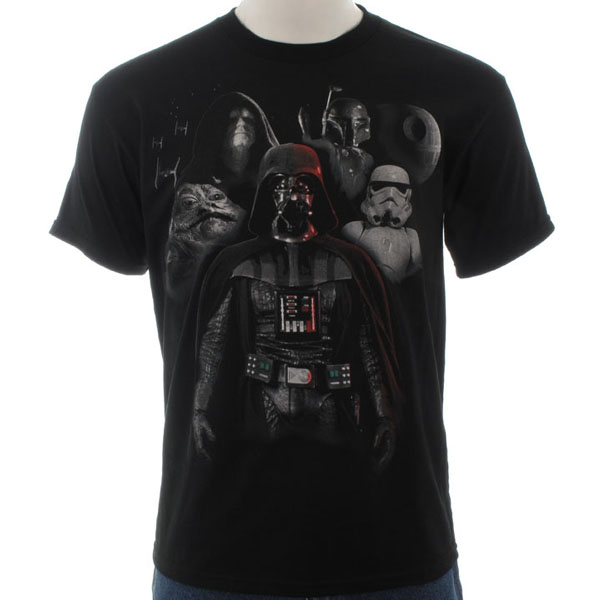 Darth Vader strikes fear in his enemies throughout the galaxy but even a dark lord of the Sith needs a little help when it comes to spreading the terror around, and the Star Wars Dark Side Group T-Shirt features Vader hanging with a crowd that’s very good at being bad.

Vader leads the bad guy parade as one of the most recognizable villains in history but the fallen Jedi wasn’t born bad, which is why the Emperor deserves his spot on this shirt. Poor Anakin Skywalker was just a sweet kid crushing on an older woman when he fell for the Emperor’s mind-games and lies, and no self-respecting bad guy can call himself truly evil without using others to do their dirty work, which is why bounty hunter Boba Fett and a Stormtroopers are always nearby. True evil revels in being able to boss others around.

While he wasn’t exactly in Vader’s pocket, the disgustingly slimy Jabba the Hutt always made a point to ruin lives so he fits in easily with this nasty crowd.

Not all of us can withstand the Dark Side of the Force; some of us are drawn into it and we need to succumb to it.  If you are a fan of all things Dark Side, then you will enjoy the Star Wars Dark Side […]

A galaxy far, far away gets some tropical Force with the Star Wars Dark Side Aloha Shirt, with the Imperial forces revealing how they spent their downtime after the Death Star was blown up. What do you do after your giant, planet-destroying space station is […]

Star Wars Helmets of the Dark Side Ice Cube Tray

This Star Wars Helmets of the Dark Side Ice Cube Tray will cool your drink while making it “cool” thanks to a bunch of floating Star Wars heads. What could be better on a hot summer day? It is a must have for Star Wars […]