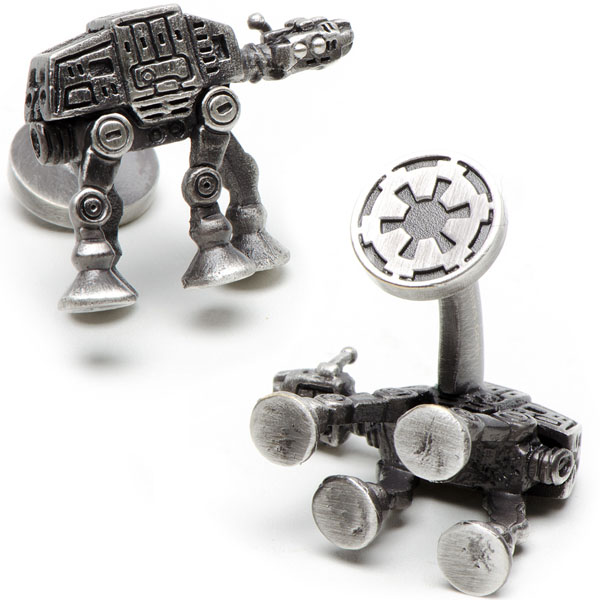 With cool beach towels and summer swimsuits packed away, it’s time to pull out the log sleeves and winter hoodies. If your 9-5 job has you dressing back up in those plain button-down shirts and slacks, try adding a little Star wars flare to your attire. The Star Wars 3-D Palladium AT-AT Walker Cufflinks are the easy way to bring style to the work place without finding yourself on the hot seat….Don’t like the Empire, try on the Millennium Falcon or Chewbacca Cufflinks instead.

Ever since the battle on Hoth in the Empire Strikes Back the AT-AT assault vehicle has been a fan favorite and these cufflinks do a great job at capturing all the fine details. Made from palladium and officially licensed, don the AT-AT cufflinks and support the Dark Side…Vader and the Empire needs you.

You can purchase the Star Wars 3-D Palladium AT-AT Walker Cufflinks at Cufflinks.com for $125 pair.

While a real-life Chewbacca might not be well received at a company meeting, the Star Wars 3-D Palladium Chewbacca Cufflinks are perfectly suitable for the board room. We’ve already seen Stormtroopers, Boba Fett and friendly droids glamming up dress shirt cuffs, and we are now […]

If you’re stuck going to an office job that requires you to dress up in a shirt and tie every day, then you’re probably not having very much fun. But look at it this way, at least you have a job and you can always […]

You’ve seen the Star Wars Stormtrooper Head Cufflinks and while those make a nice trophy to wear on your sleeve, they can’t compare to the Star Wars 3-D Boba Fett Helmet Cufflinks. Did you ever think you’d be brave enough or lucky enough to wear […]

Are you looking for a great LEGO set that is inexpensive and may be able to hold you or your kids over until Christmas? The LEGO Star Wars Snowtrooper Battle Pack (8084) is perfect with its wintry theme and 4 minifigures (2 snowtroopers, 1 Imperial […]