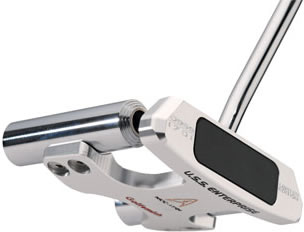 After having been used as both a chandelier and a telephone, it is now time to let the classic spaceship show the world that it can be of good use to those who play golf – just as Star Wars showed us not long ago.

The design concept was simple enough, a flat putter head that was balanced to the rear by two off-set cylindrical weights. Once it was produced, it bore an uncanny resemblence to the Enterprise, thus inspiring its all-out redress as a licensed Star Trek item that is so cool, it may inspire Trek fans to take up golf! [Uh, some of us do already! – Ed.]

The putter comes in two versions, the higher-end Limited Edition features a special “NCC-1701” head with the serial number (only 1,701 will be produced) engraved on the putter face, a True Temper Double Bend steel shaft, Winn NCC-1701 grip with gold accents, and a magnetized “Limited Edition” mallet headcover.

The new NCC-1701 Enterprise putter from Golfsmith is available from the official Star Trek store for $129.99.

After having seen the design of this classic spaceship as a source of inspiration for a chandelier, a telephone a putter and bottle opener, we’re finally about to see it as the one thing many have been waiting for; a radio-controlled version of the Star […]

This Star Trek U.S.S. Enterprise NCC-1701 Coasters is a set of 6 glass coasters that lets you explore the Enterprise and decorate your home in a cool way. They have a layered design on the top and bottom of the glass that creates a very […]

You’ve heard of Putt Putt golf, but chances are you don’t know Butt Putt Golf. Butt Putt Golf Farting Practice Putter combines two of your favorite things. Golfing and farting. If that isn’t enough to entice you I don’t know what is. It’s an honest […]

Put these Star Trek U.S.S. Enterprise Car Emblems on your car and your fellow fans will give you a honk. You get a set of 3 emblems to spruce up your vehicle. You get the original logo, NCC-1701, & U.S.S. Enterprise NCC-1701-D. They are going […]

Now you can get both Star Trek pizza cutters in one package, thanks to this Star Trek Pizza Cutter Set. You get the original Enterprise and the Enterprise D. Choose which ship you want to cut your pizza with. Kirk or Picard. Then Make it […]

Time, the final frontier. Put the Enterprise on your wrist with this awesome Star Trek Original Series NCC-1701 Watch. This watch is styled after the U.S.S. Enterprise. This officially-licensed Star Trek: The Original Series watch looks fantastic. It features a stainless steel case and back. […]