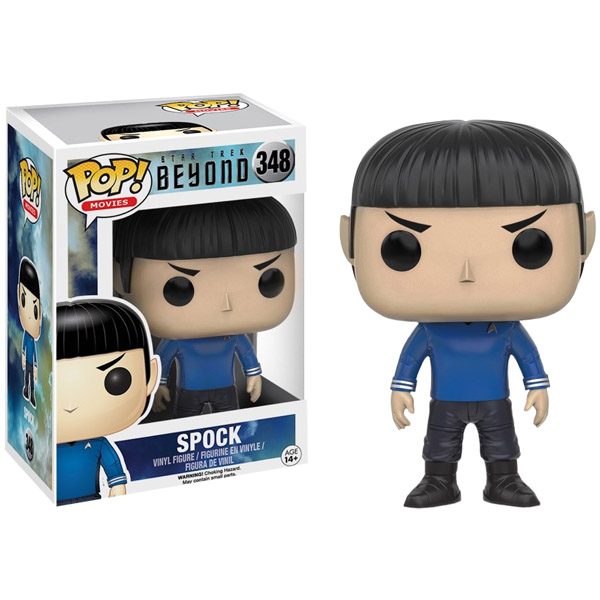 Maybe it’s not logical to like an inanimate object like the Star Trek Beyond Spock Pop! Vinyl Figure but some things can’t be explained with logic.

Standing 3 3/4-inches tall and based on Zachary Quinto’s Mr. Spock in Star Trek Beyond, the Vulcan first officer stands ready to join the Star Trek Beyond Kirk Pop! Vinyl Figure and go where no body has gone before.

The Star Trek Beyond Spock Pop! Vinyl Figure will be available August 2016 but it can be pre-ordered now for $10.99 at Entertainment Earth.

Set phasers to stun and tell Scotty to push things up to warp factor 8 because the Star Trek Beyond Kirk Pop! Vinyl Figure has arrived… and it’s out of this world. Standing 3 3/4-inches tall and based on Chris Pine’s new alternate timeline Kirk, […]

A new character enters Captain Kirk’s dating pool with the Star Trek Beyond Jaylah Pop! Vinyl Figure. Standing 3 3/4-inches tall and based on the new character portrayed by actress Sofia Boutella, Jahlah is an alien warrior who seems to prefer sitting in Kirk’s seat […]

While he has crossed beyond the final frontier of Starfleet’s Federation, the Star Trek Beyond Chekov Pop! Vinyl Figure lets everyone remember that actor Anton Yelchin is, and always will be, a part of the Star Trek universe. Based on Yelchin’s portrayal of Chekov in […]

It’s only logical that true Star Trek fans would add this Star Trek First Officer Spock Maxi Bust to their collection for one simple reason – It’s Leonard Nimoy. No disrespect to Zachary Quinto because he made a believer out of me as Spock in […]

Everyone’s favorite grumpy outer space medical professional has been transformed into the Star Trek Beyond Bones Pop! Vinyl Figure. Standing 3 3/4-inches tall and based on Karl Urban’s portrayal of Doctor Leonard ‘Bones’ McCoy in Star Trek Beyond, the doctor of the U.S.S. Enterprise is […]