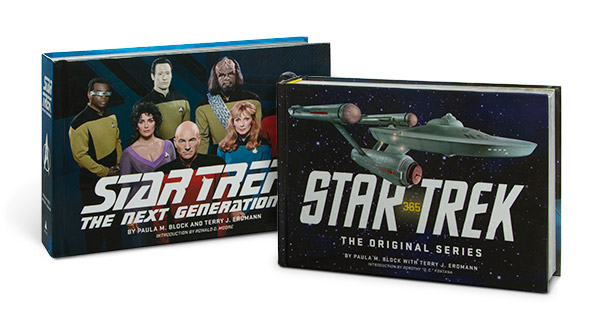 The Star Trek 365 Hardcover Books are definitive guides to the first two Star Trek series. This is going to be an absorbing read.

These volumes are full of pictures and illustrations and a full episode guide for each show. Each book covers the entire series in amazing detail, with in-depth commentary, behind-the-scenes histories and much more. These books have everything you want to know about each show. I could get lost in these books for hours and still have things I haven’t seen.

Star Trek: The Original Series 365 is the definitive, authorized guide to Star Trek. A visual celebration of the original voyages of the Starship Enterprise, the book covers the entire series in unprecedented detail, combining in-depth commentary, behind-the-scenes histories, load of pictures and illustrations, interviews with all involved (writers, cast, and crew) with synopses for each of the series’ 79 episodes.

Star Trek: The Next Generation 365 provides a fresh, accessible overview of the entire series, including an authorized guide to all 178 episodes. Featuring rarely seen and now-classic photography and illustrations, this visual celebration of the voyages of Captain Picard, his crew, and the Enterprise-D offers a loving look back at the Emmy and Hugo Award–winning series.

They are only $29.95 from ThinkGeek.com. You can also find the Star Trek: The Original Series 365 and Star Trek: The Next Generation 365 at Amazon for about $20.

Get ready to enjoy Star Trek: The Original Series, in a brand-new way with Star Trek: The Art of Juan Ortiz… which actually is brand-new, even though it looks old. Confused? Stick with me a little longer and it will be as obvious as a […]

Star Trek: The True Science Behind the Starship Voyages

If you were ever curious about the science behind Star trek, this Star Trek The Official Guide to Our Universe: The True Science Behind the Starship Voyages Hardcover Book is perfect for you. It reveals the real science behind Star Trek! Astronomy educator Andrew Fazekas […]