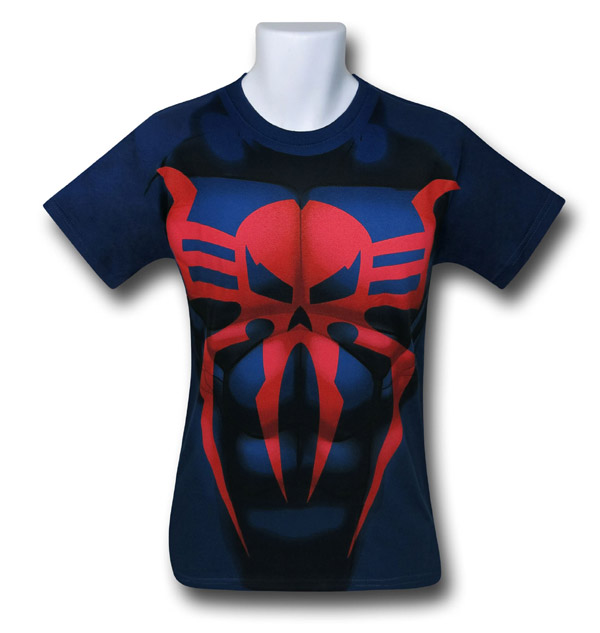 There have been a few different versions of Spider-Man through the years, but the Spider-Man 2099 Costume T-Shirt features my all-time favorite Spidey costume.

Okay, you can’t really go wrong with the classic red-and-blue outfit worn by Peter Parker and I was a fan of Ben Reilly’s hoodie-wearing Scarlet Spider but Miguel O’Hara’s web-slinger of the future has the most awesome Spidey emblem you can imagine, featuring a symbol that looks like Spidey’s logo and the Punisher’s logo got freaky and had a baby. Now, that attention-getting emblem is available on a navy blue tee, letting anyone be Spidey 2099, complete with an artistically-provided six-pack.

Your Friendly Neighborhood Spider-Man is still flying high in the future, and the Spider-Man 2099 Polystone Statue offers a great look at the wall-crawler towards the end of the 21st century. Naturally, Peter Parker is no longer the man behind the Spidey mask, and Miguel […]

The wall-crawler of the future enters the present with the Spider-Man 2099 Statue. Based on Miguel O’Hara’s futuristic webslinger of the year 2099, this 27-inch-tall statue features the future Spidey, dressed in his iconic red and blue Spidey suit, standing on a light-up base. In […]

The Marvel Now! Spider-Man 2099 ArtFX+ Statue stands just over 5-inches tall and is in a half-crouching pose. He is ready for anything. He is ready to leap into action in his blue and red suit. This statue also has magnets in the feet to […]