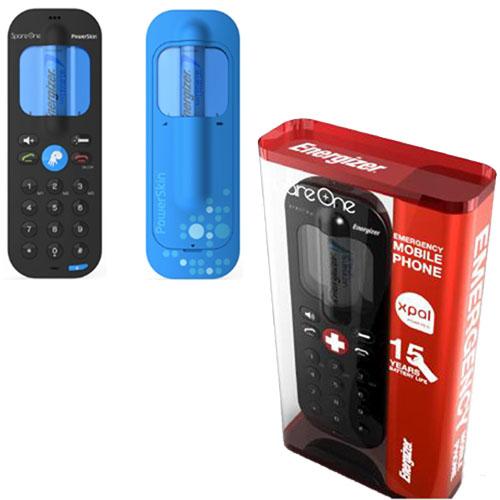 Are you looking for the perfect emergency cell phone for your survival pack or zombie kit? Just announced at CES 2012, the new SpareOne Cell Phone that Maintains a Charge Up to 15 Years. From XPAL Power, technology leader behind portable power manufacturers PowerSkin and Energizer Energi to Go, this patented technology works with one AA (Alkaline, NiMH or Lithium) battery.

Not only does the SpareOne Cell Phone maintain its charge for up to 15 years, it also has an amazing talk time of up to 10 hours. For reliability and protection that even forgetful people can count on, the SpareOne is high-tech in the simplest of forms. Enjoy having this safety device on your next outdoor trip and family vacation.

“SpareOne’s breakthrough technology provides an unprecedented lifeline during dire situations that require an emergency response,” said Alan Cymberknoh, SpareOne Project Director at XPAL Power. “By operating on a single AA battery, SpareOne solves so many daily issues, serving as a simple back-up phone you can carry without worrying whether it’s charged or not. It can be left in a car for emergencies, used by hotels who want to pre-program concierge numbers for guests, passed to your children or parents to maintain an open line of communication – it’s essentially designed to make and receive the most important calls, no matter what.”

You can purchase the SpareOne, equipped with an Energizer Ultimate Lithium AA battery and a Micro SIM card, nationwide in early 2012 for $49.99 on at PoweriSkin and SpareOnePhone.com.

Cell phones are great for fun and games, and they’re especially handy during emergencies… except when they lose power and there’s no way to recharge, but the Eton Hand-Crank Emergency Cell Phone Charger will let you scratch that particular worry off your list. If you’ve […]

If you thought you had seen it all when it comes to cell phone jammers, think again. Hiding the equipment in a packet of cigarettes is out – the latest trend is apparently to hide the jammer in something that is supposed to look like […]

This past week we completed a hands on review of the Hub Innovations REV360 iPad Case. It’s a pretty cool product, so be sure to check it out. We were also busy this past week with a ton on new product announcements out of CES […]

As they say, the future of cars is with alternative means of fuel and energy, one of these being water. The Fuel Cell Car Kit offers you a peek into this technology by letting you in on the action as well. In the kit, you […]

I understand that the Cell Phone Spy Recon might have some practical purposes attached to it, but for the most part, I definitely wouldn’t want this gadget to fall into the wrong hands. This mobile phone monitoring tool installs a covert application onto your smartphone, […]

It seems that having one of those multimedia Bluetooth cell phone watches that covers 83% of your lower arm simply isn’t enough for some – they need it gold plated too.