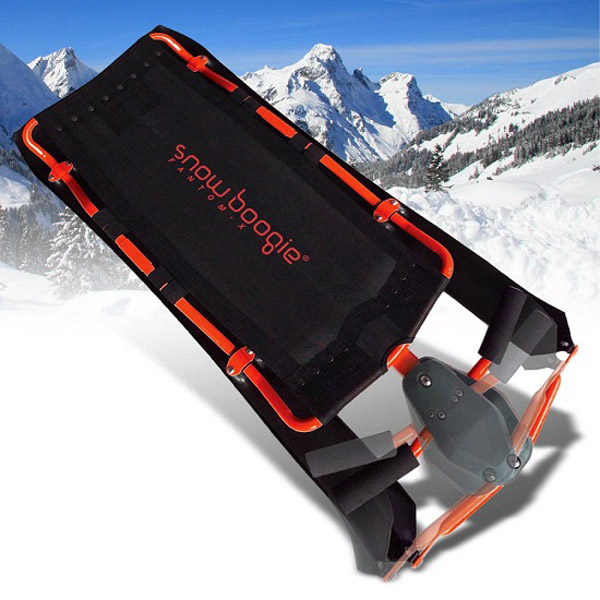 Whooshing down a snow-covered hill is one of the most fun ways to spend a winter day, but wouldn’t it be even more fun if you could actually control where you’re going? The SnowBoogie Fantom X solves that tiny little problem by adding handlebars to the traditional sledge.

The fine sport of sledging has been around for decades but the mechanics behind the pastime haven’t really caught up with the times. We can put a man on the moon but we still have to dig our hands in the snow to keep from ramming into a tree? Seriously? The 21st Century has finally arrived for the sledge, and it’s brought the power of steering with it.

The lightweight frame is mounted on two pivoting ski’s that can be easily directed with the tiny handlebars that are placed in such a way that you can either ride down the hill in a sitting position or head-first and still have no problem operating the high-tech guidance system. Okay, something that’s basically a metal rod isn’t really fancy but doesn’t the term ‘high-tech guidance system’ add just a little bit of dramatic flair?

Add some control to your sledging fun and show gravity who the boss is with the SnowBoogie Fantom X for £99.95 ($154) from Red5.

Winter is here, snow is on the ground, and you’re ready to trudge up that hill with your trusty sled and relive the days of old as you slide down that bank of white powder. Unfortunately, your knees aren’t what they were before and who’s […]

What you’re looking at is the first ever fold-away high-tech sledge with shock absorber – a safer and more comfortable alternative to traditional sledges.

When you’re young, sledding down an icy hill can be thrilling, even if you choose to go down sledless. Hitting bumps hard means extra bonus points, and there is no such thing as emergency trips to the chiropractor the next day. As you age though, sledding can be a […]

If you think the High-Tech Sledge is a little over your budget, you might want to consider this Porsche Design winter toy as an eye-catching alternative.

If you’re still a kid, then one of the highlights to winter (aside from the long break from school) is snow. Make snowballs and throw them at each other; use the cold, fluffy stuff to build a snowman along with the other neighborhood kids; and […]

For those of you who enjoyed last year’s Retro Style USB 2.0 Webcam, here’s a tiny LED projector in a similar cool looking old school design that should be right up your alley.