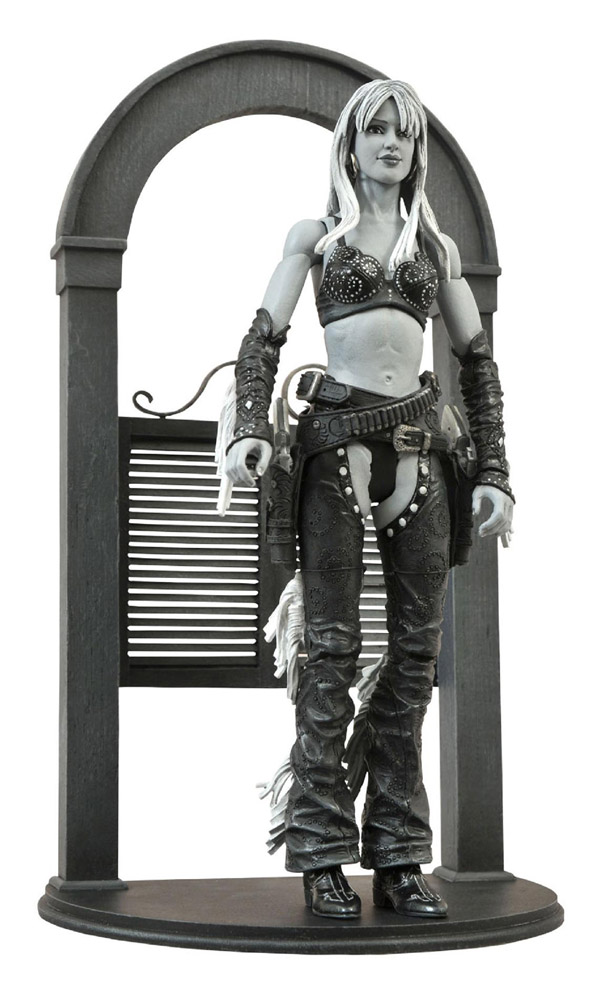 The exotic dancer with a heart of gold from Frank Miller’s Sin City is ready to strut her stuff with the Sin City Select Nancy Action Figure.

Based on Jessica Alba’s portrayal of the character in 2005’s film adaptation of Miller’s graphic novel series, the highly-detailed 7-inch-tall action figure, which is fully articulated, features a deluxe display base, and the same graphic black-and-white coloring that allows the figure to remain faithful to both the movie and comic book versions of the character. Nancy also happens to be wearing her comic book accurate and film accurate outfit, consisting of leather chaps and as little actual clothing as possible.

The Sin City Select Nancy Action Figure will be available July 2014 but it can be pre-ordered now for $22.99 at Entertainment Earth.

If you are a fan of Frank Miller’s Sin City, you’ll want to add Sin City Monopoly to your collection of geek toys. It is the classic game that you know from Childhood, but with a Sin City makeover. The Sin City Monopoly board game […]

If you love Sin City and want to put some of Frank Miller’s style into your next poker night, try these Sin City Comic Book Second Edition Playing Cards. Frank Miller’s neo-noir comic book series will spice up your card games with some amazing art […]

Rule #1 When someone asks you if you’re a god, you say yes! Rule #2 When you want to recreate exciting adventures from the movie, you use the Ghostbusters Select Series 2 Action Figure Set. Standing 7-inches tall and featuring 16-points of articulation, Ghostbusters Peter […]

This Marvel Select Dr. Strange Movie Action Figure is a 7-inch action figure that depicts Dr. Stephen Strange as he appears in the Marvel Studios film. He has a screen-accurate costume and looks just like actor Benedict Cumberbatch. The detailing is superb. It also has […]

Sometimes big heroes come in small sizes. Like Antman. This Marvel Select Antman Action Figure shows the small hero who is the next big Marvel movie star! This figure is based on the Marvel Studios film, Ant-Man. The 7-inch scale figure captures Paul Rudd as […]

Victor Creed is a hard man to kill but the Marvel Select Zombie Sabretooth Action Figure shows that even he is vulnerable to a bite from the undead. The blood-thirsty former friend and ally of Wolverine has always had an insatiable hunger for violence but […]

Who ya gonna call? Call the Ghostbusters Select Series 1 Action Figure Set and they will rid your action figure collection of spooks and specters. Series 1 includes Ray Stanz, Winston Zeddemore and Louis Tully as 7-inch scale select action figures! These figures have detailed […]

Now is the perfect time to add the ragin’ Cajun to your action figure set, with this X-Men Gambit Marvel Select Action Figure. This Gambit statue capture’s the character’s attitude perfectly and he comes with a Danger Room base. Gambit is one of the most […]