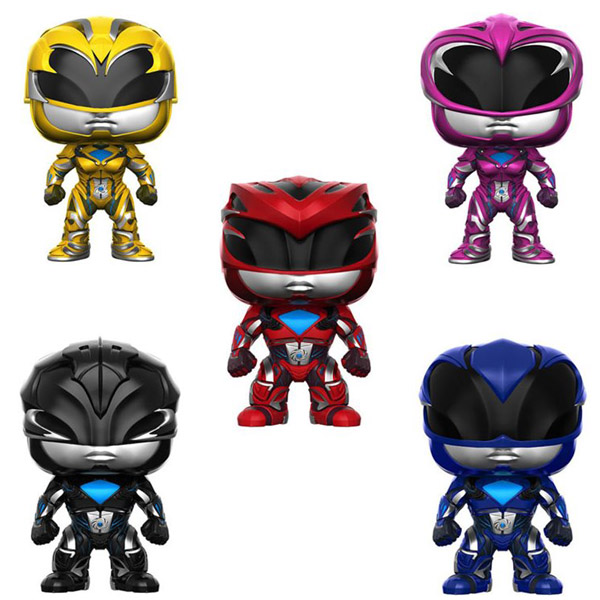 Based on the characters in the upcoming Power Rangers movie and standing approximately 3 3/4-inches tall, these five Funko figures deliver the morphin’ power of Red Ranger Jason, Blue Ranger Billy, Black Ranger Zack, Pink Ranger Kimberly, and Yellow Ranger Trini as they join forces to defend Earth from Rita Repulsa and other enemies.

The Power Rangers Movie Pop! Vinyl Figures will be available February 2017 but they can be pre-ordered now for $10.99 each at Entertainment Earth. Choose from the Red Ranger, Blue Ranger, Black Ranger, Pink Ranger, and Yellow Ranger.

If you imagine the Power Rangers and think of a bunch of lame kids in brightly-colored spandex bouncing around and over-acting as if their lives depended on being cheesy, the Mighty Morphin Power Rangers Green Ranger and Dragonzord Fine Art Lithograph will probably take you […]

Grab your Mighty Morphin Power Rangers Legacy Edition Morpher and hold it out in front of you because… It’s Morphin Time. Harness the power of the Dragonzord, Mastodon, Pterodactyl, Triceratops, Saber-Toothed Tiger, and Tyrannosaurus with this die-cast metal and plastic replica that measures about 10-inches […]

DC Comics’ ultimate team of superheroes meets the heroes of Boom! Studios and Saban Brands with the Justice League/Power Rangers Comic Book. It’s probably not the team-up comic geeks have been craving but with a Power Rangers movie quickly approaching, you knew something would have […]

Mega Mighty Morphin merchandise! This Mighty Morphin Power Rangers Legacy Dino Megazord Action Figure is made of plastic and die-cast metal. It looks amazing. It has a glossy metallic paint job and comes in 20th Anniversary packaging. If you are a fan of the old […]