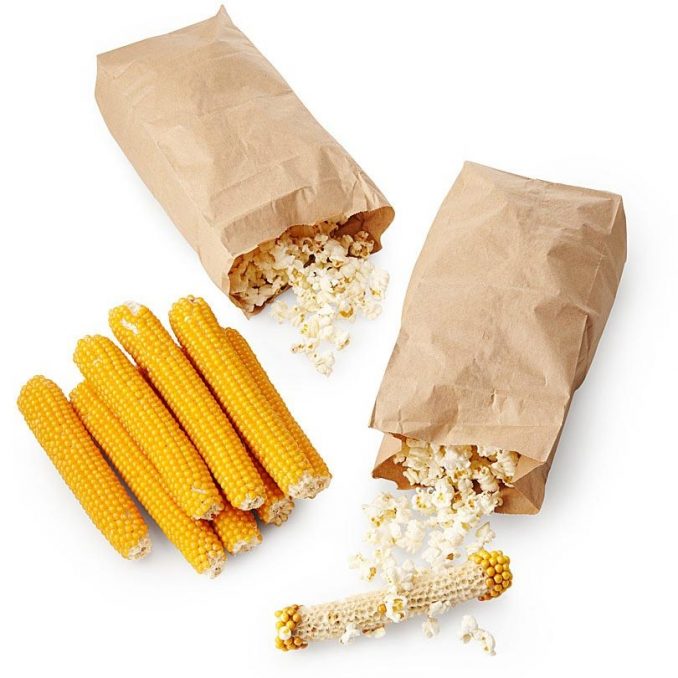 We’ve all had corn on the cob, but have you ever heard of Popcorn on the Cob? With this clever product, the popcorn kernels are still on the cob. You simply put butter and salt on top to taste and then stick it in a bag to microwave to pop.

I’m not sure if it will taste better than regular microwave popcorn, but it would be fun and interesting to try. Plus, it could potentially be healthier, since it’s simple and natural and you wouldn’t be adding any artificial flavorings or colors. There are many articles out there warning of health dangers from microwave popcorn (mostly related to the nonstick lining on inside of the bag and to the flavoring agent diacetyl), so this could be a safer alternative for people that consume popcorn regularly.

Hypothesis: Popcorn kernels learn popcorn protocol from the cob. It is, after all, connected to the stalk, and therefore the roots, surely—surely!—have a direct line to the ancient maize wisdom of the seeds. Ergo: Kernels that have spent the most time on the cob being taught the traditions of their Central American ancestors will pop and taste the best. Conclusion: These kernels don’t leave the cob until they’re popped, making them the most well-behaved and deliciously corny-tasting popcorn kernels in existence. Butter or salt the cob, place it in one of the included paper bags, fold it closed, place in the microwave, and pop like any other popcorn. 10 cobs included. Grown in Indiana.

Purchase Popcorn on the Cob from Uncommon Goods. It costs $17 for a package of 10 cobs.

Anybody want some popcorn as they watch their home planet being destroyed? That’s right, that’s no moon. It’s a popcorn maker from a galaxy far, far away. The Star Wars Death Star Hot Air Popcorn Maker will have you eating delicious popcorn in minutes…and hopefully […]

You may not have just won the Stanley Cup like the Washington Capitals, but you can still take home the coveted trophy with the NHL Stanley Cup Popcorn Maker. This replica of the Stanley Cup opens to reveal a popcorn maker that quickly air pops […]

As my son is engaging in popcorn-selling as a fundraiser, it’s been challenging coming up with ways for him to excite folks about buying popcorn. Mr. Orville Redenbacher has pretty much dominated the territory by making popcorn easily obtainable at affordable prices, and has left […]

True story: When I saw this picture of the Buttered Popcorn – Air Freshener, I left my laptop for a moment to grab a handful of caramel-coated popcorn from the tub in the kitchen. So imagine just how much more popcorn you’ll be eating or […]