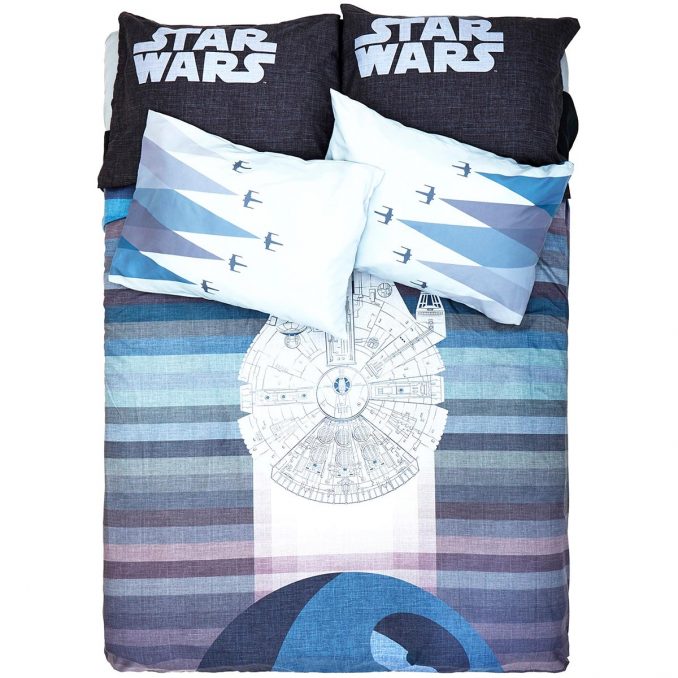 Awesome bedding, like this Millennium Falcon Duvet Cover & X-Wing Pillowcase Set can transform your bedroom with a new style. It may not be as impressive as switching out your bed to the Millennium Falcon Bed or X-Wing Bed, but it is a whole lot cheaper and easier.

Two Star Wars logo pillow shams are included with the Millennium Falcon Duvet Cover, which is sized to fit full and queen size mattesses. The X-Wing pillowcase set is sold separately, but you have to admit it goes really well with the duvet and shams.

It’s the ship that made the Kessel Run in less than twelve parsecs – and now it’s here to safely pilot you to dream land. This blue tone duvet cover and matching shams features a Millennium Falcon design guest starring the Death Star. You love it, we know. The Star Wars Millennium Falcon Duvet Cover comes with a full/queen duvet measuring and two shams measuring 24″ x 30″.

Catch a flight to planet sleep with these X-Wing pillowcases from Star Wars. You love them, we know. These 100% polyester microfiber pillowcases measure 24″ x 30″.

Available exclusively at BoxLunch, the Millennium Falcon Duvet Cover With Shams is $69.90 and the X-Wing Pillowcase Set is $24.90

The Star Trek Borg Duvet Cover and Pillowcases will let you slide between the sheets and dream with the Borg collective. At least it will feel that way. This duvet cover and pillowcases set is printed with a Star Trek Borg-cube pattern. It is made […]

This Star Trek Schematic Duvet Cover and Pillow Cases set will let you boldly snore where no man has snored before. The duvet cover and pillowcases are printed with the U.S.S. Enterprise NCC-1701. They are made of 100% cotton and is sure to be comfortable. […]

Keeping food out of the bed is going to be tough when you’re dreaming and seeing burgers all the time with this Cheeseburger Duvet Cover. The 100% cotton duvet cover comes in several sizes and features matching bun pillows. If you’re a burger fan or […]

This Star Wars TIE Fighter Bedding is some serious Empire themed bedding for anyone who loves TIE Fighters. Get in, get cozy and drift off to sleep pretending that you are piloting your ship. You can choose a Duvet Cover in Full, Queen, or King […]

With the Star Wars Millennium Falcon Full/Queen Comforter & Shams Set, you’ll be fast asleep in less than 12 parsecs but be careful because a couple of TIE fighters are pursuing you into Dreamland. The 86″ x 90″ comforter features a large eye-catching image of […]

If you’re decking out a bedroom in Star Wars, you have incredible choices of furniture these days. An amazing centerpiece would be this Millennium Falcon Bookcase Bed, unless you already have your heart set on the X-Wing Bed or AT-AT Bunk Bed. Combine it with […]