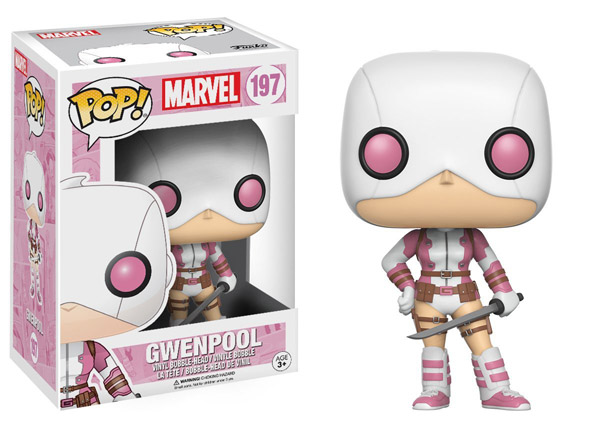 A not-so-humble origin leads to the creation of the unbelievable Marvel GwenPool Masked Pop! Vinyl Bobblehead.

Inspired by a variant Deadpool cover that mashed-up the Merc with the Mouth and Spider-Gwen, the character known as GwenPool actually has nothing to do with either character. Instead, Gwen Poole is a person from the real world who suddenly finds herself in the Marvel Universe. Deciding she doesn’t want to live an ordinary life in a world filled with superheroes and supervillains, she becomes the assassin known as GwenPoole.

Standing approximately 3 3/4-inches tall, the colorful character is wearing her eye-catching pink and white costume, with her trusty Katana ready to do some damage.

The Marvel GwenPool Masked Pop! Vinyl Bobblehead will be available March 2017 but it can be pre-ordered now for $10.99 at Entertainment Earth.

Gwen Poole enters the Funko world with the Marvel Pop! Vinyl Selfie Gwenpool Bobble-Head. She began life as an amalgam of Gwen Stacy and Deadpool for a Deadpool variant cover but now the Unbelievable Gwenpool isn’t connected to either character. Tired of the real world, […]

This Marvel Gallery Gwenpool Statue is taking a selfie. She is sculpted by Alejandro Pereira and stands 9-inches tall. Now is your chance to get the first merchandise ever made of this character! The detail is awesome and she is on a circular Gwenpool logo […]

The Fallout Dogmeat Bobblehead lets you display Dogmeat from Fallout proudly. He was your best buddy in the game and now you can enjoy his company in bobblehead form, either on your shelf or on your desk. He is sitting upright with his shades on, […]

Are you up for another Darth Vader entry? Ok, I’ll make this short and promise that the next Star Wars related item will be with Boba Fett instead. The Darth Vader Tie Fighter Bobble Head ($30) measures approximately 6×5.5 inches and will look great together […]

This Star Wars Pop! Vinyl Hammerhead Bobblehead is exactly what your collection is missing. It’s your favorite alien from the cantina scene. The Ithorian that you know and love is now a vinyl bobble head. This alien measures about 3 3/4-inches tall. If you don’t […]