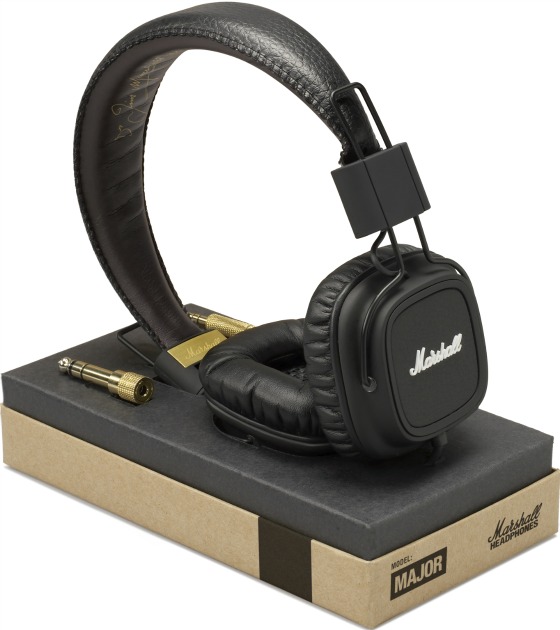 The Major, the anticipated headphones from Marshall Amplification – the British company mainly known for their popular music amplifiers – have now been officially released.

The exterior of the headband is made out of the same vinyl used in Marshall amplifiers and it bears the original Marshall texture. The coil cord refers to vintage style guitar cables and the plug is a beautiful 3.5 millimeter replica of a classic tele plug, which can be used with the included 6.3 mm adapter for plugging in to your guitar amp or stereo.

Besides being straight up dazzling, The Major is a solid workhorse with great stamina, designed with non-stop, all-day listening in mind. No matter how hard and heavy the music, the super soft cushions will rest lightly upon your ears and if you by chance would like to take The Major off of your head, they are foldable for easy storage and transportation.

The Major headphones from Marshall are available from the official website for $99.

Last week GeekAlerts told you about the Marshall FX Apple Certified Headphones and now we have another outstanding set to tell you about. The Marshall Major White Headphones offer best in class sound quality with the added flare of white vinyl which bears the original […]

Are you looking for that perfect gift to get your audiophile loving significant other this holiday season? Then look no further than the newly released Marshall FX Apple Certified Headphones. The Marshall FX headphones come in two versions, Major FX (over-ear model) and Minor FX […]

Sweden based Urbanears just announced their new line of new line of “Editions” headphones. These new models will offer something new and extra for your hearing enjoyment. The Urbanears Quilted Plattan Headphones bring a new style and comfort to your headphones and are the first […]

You want to rock out like a guitar hero but you can’t play the guitar to save your life? The iPad Guitar Tutor set you on the path to musical righteousness, and you don’t have to worry about anyone laughing at you while you’re still […]

Do you often say that you can’t go through your day without your earphones plugged into your ears 24/7? Then you can make that statement–and mean it, literally–with these H2O Surge Sportwrap Waterproof Headphones. These headphones are 100% liquid-proof. And by that, we mean water, […]