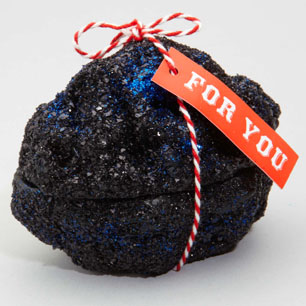 I can name a lot of people who deserve a huge lump of coal in their stockings. But that’s all Santa’s department and none of my business. Lately, he’s been having a hard time finding enough real coal to give out to all the naughty ones, since it’s mostly being depleted for energy purposes. Instead, Santa is opting to wrap gifts for this year’s blacklisted kids with this faux Lump of Coal Cachette.

Tied with a dash of red and white bakery twine, the sparkly gem comes with a gift tag that reads, “For You.” Do we need to mention it makes a great stocking stuffer? Yeah, didn’t think so. Lump of coal is covered with black and blue glitter and measures 3″x4″. 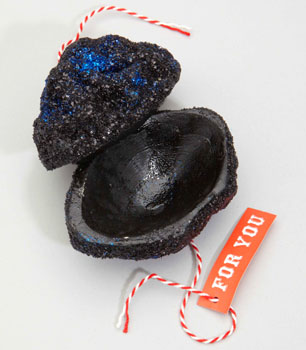 Christmas morning scene: Bad person checks out stocking and says, “It sparkles, it’s heavy, it’s not a charred acorn, not a meteor, not a diamond. Hey, it opens! Let’s see what’s inside. Not Uh-Oh Emergency Underpants and the World’s Smallest Jigsaw Puzzle! Aww, c’mon Santa! I swear, I can change.”

Santa’s helpers can get the Lump of Coal Cachette at Fred Flare for $18.

Mr. Bilbo Baggins, the ‘Don Corleone’ of all Hobbits, will be the central character of the upcoming film “The Hobbit: An Unexpected Journey,” opening December 14. Hooray for Hobbits, Dwarves, Elves, Sorcerers and Gollum! Meanwhile, we’d like to give you a glimpse of some elegant […]

It’s the little things that count and having the right Christmas Stocking can make all the difference. Santa has seen his share of video games and he’ll appreciate this 8-Bit Christmas Stocking and maybe he’ll stick a new Nintendo Wii U under your tree. The […]

A few days ago we saw the Mini Lego Christmas Tree, a budget Lego set that would make a great stocking stuffer. Today we have another, the LEGO Mini Santa Set. This 72 piece set allows you to build 3 Santas and their snow sports […]

There were a number of budget Christmas LEGOs this year, such as the Christmas Tree and Santa Set we already posted about. There is one more, the LEGO Christmas Holiday Stocking. At just $5 it makes a great stocking stuffer…one that may blow your mind […]

Enjoy the holiday season in style with the Big Bang Theory Soft Kitty Christmas Stocking. Sheldon approved and ready for the filling, this plush stocking features Soft Kitty wrapping itself around a Christmas stocking. The expression says it all; holidays are time for fun and […]

Getting into the “Holiday Spirit” can be tough, especially if you have a large family. And we adults know how helpful alcohol can be in those times 😉 Just grab the Santa’s Beer Belly Pilsner Glass, fill it to the top with your favorite specialty […]

If you have a little girl, or just like cute things yourself, you need this Hello Kitty Sugarplum Fairy Plush Christmas Stocking. Covered in white furm sparkling crystal gems, and embroidered snowflakes, this Christmas stocking features Hello Kitty as a sugarplum fairy. Although it is […]