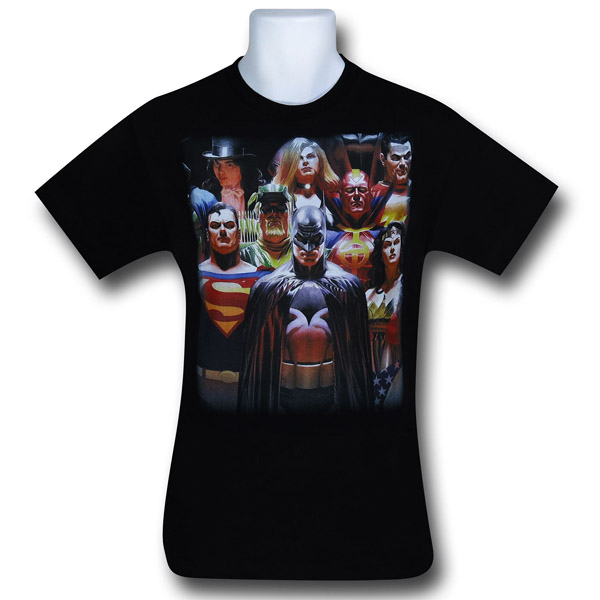 The awesome, realistic art of Alex Ross moves from comic book covers to the Justice by Alex Ross T-Shirt, letting you keep the Justice League with you all the time… or at least as long as you wear the shirt.

Based on the cover of DC Comics’ Justice, Volume 1, this 100% cotton shirt features Batman, Black Canary, Green Arrow, Red Tornado, Shazam, Superman, Wonder Woman, and Zatanna, which only scratches the surface of all the characters involved in the epic comic book storyline.

If you’re a fan of Justice, Alex Ross, the Justice League, or just an admirer of great-looking shirts, you’ll want to add the Justice by Alex Ross T-Shirt to your wardrobe. It’s available for $21.99 – $24.99 at SuperHeroStuff.com.

Get ready for some Justice League action Alex Ross style. This Justice League Alex Ross Action Figure 6-Pack gives you the World’s Greatest Heroes. You get Superman, Batman, Wonder Woman, Green Lantern, Aquaman and The Flash. All united in the perfect team. All 6 Justice […]

Get ready for all your passions to collide when you get to show off your appreciation for sexy ladies, classic comic book characters, and fine art with the Miss Fury Lithograph By Alex Ross. When it comes to breathing life into fictional 2D characters, Alex […]

This Justice League Original 7 by Alex Ross Fine Art Sculpture depicts the original 7 members of the team. Green Lantern, Flash, Superman, Batman, Wonder Woman, Aquaman, and Martian Manhunter. IT comes with a high-quality lithographic print of the original artwork, by Alex Ross. It […]

Thor, Loki, and a few other Asgardians come together for an eye-catching scene on the Thor Marvel 75th Special Edition Alex Ross T-Shirt. Hold on to your hammer because this 100% cotton tee features a reproduction of the painted variant cover by Alex Ross for […]

Old School meets the New Generation with the Guardians of the Galaxy Alex Ross Art Print. You’ve met Star-Lord, Groot, Rocket Raccoon, Drax, and Gamora. Now get ready to meet those who came before with this 18 x 24 print by Alex Ross. In addition […]

Justice gets carved into stone with the Justice League Mount Justice T-Shirt. Superman, Wonder Woman, Flash, and Batman are too humble to have their faces carved into a mountain but it does make for an awesome sight. Who would visit poor Mt. Rushmore if we […]