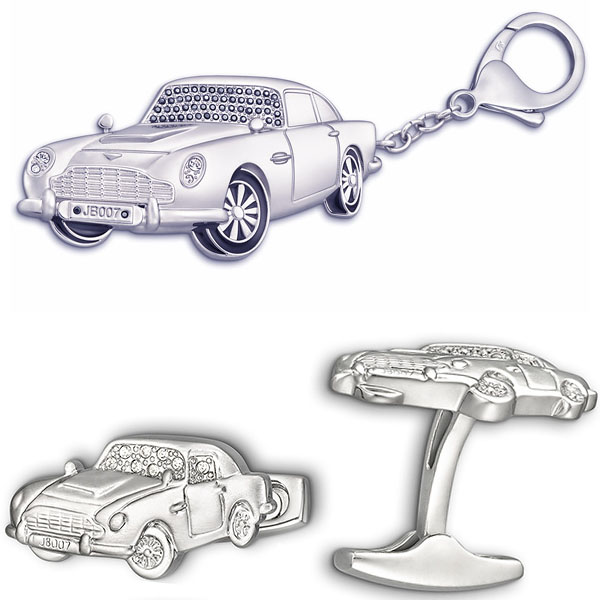 The highly-anticipated 007 flick “Skyfall” is headed for theaters in November, and for the occasion the company Swarovski is coming out with a collection that will commemorate the spy’s 50th anniversary. The jewelry was designed by Britain’s own Stephen Webster.

Starting in mid-October, Swarovski stores will be carrying beautiful memorabilia such as an Aston Martin keychain whose windshield and headlights are studded with small crystals. Celebs at the Toronto International Film Festival were lucky enough to receive this keychain as swag.

There will also be Aston Martin cufflinks, as well as jewels symbolic of what Bond Girls have worn during the fifty-year history of Bond films. For example, there will be pieces based on the Algerian Love Knot that Bond love interest Vesper Lynd wore in 2006’s “Casino Royale.”

For now, we’ll just have to sip on our martinis and wait for the new merchandise and movie to arrive. Check out Swarovski in the near future for more information on the new Skyfall Collection.

We can’t all be James Bond but at least we can pretend to live the life of 007 with the James Bond Remote-Controlled Stunt Car, and we don’t have to listen to Q lecturing us about being careful behind the wheel. While it would be […]

It is the New Year, so it is time to take down your Christmas decorations if you haven’t done so already. It is also a great time to clean house and get organized. There’s a new product that can help with both of these, as […]

Bond by Design: The Art of the James Bond Films Hardcover Book

This amazing book titled Bond by Design: The Art of the James Bond Films Hardcover Book covers all the movies from Dr. No to Spectre. It features behind-the-scenes looks at the sets, vehicles, gadgets, and more from all of 007’s adventures. It also has 2 […]

Everyone thought that the “Twilight” saga was great for getting women’s romantic tendencies going at an all-time high, but that’s nothing compared to the effect the latest “Fifty Shades of Grey” book series is having on female book club members. It’s hard to quantify, but […]

The bird on the Parrot Swarovski Crystal iPhone 4 and 4S Case can’t say if you had a cracker, but it will make your iPhone 4 or iPhone 4S bling out. The case is assembled by hand and is adorned with over a thousand Swarovski […]