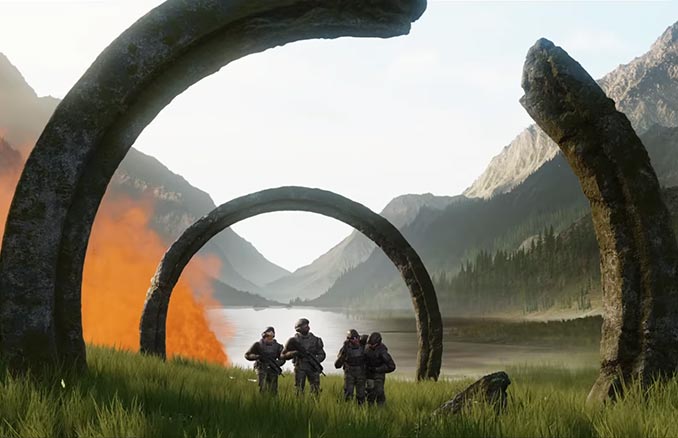 The next Halo video game is a while off, which is why the Halo Infinite Announcement Trailer doesn’t provide a whole lot of information. Naturally, given that the franchise is owned by Microsoft Studios, Halo Infinite will be an Xbox and Windows PC exclusive. However, since the game is still a ways off, there is speculation that it will be a launch title for the next generation Xbox game console.

It is expected that Halo Infinite will be significantly advanced visually from Halo 5 since it will be using a new game engine called Slipspace. It is purported to be a brand new engine from the ground up, which is overdue for the Halo franchise. That also explains why it will take a while for the game to be finished.

The Master Chief returns in Halo Infinite – the next chapter of the legendary franchise. Developed by 343 Industries and created with our new Slipspace Engine, Halo Infinite was revealed at the Xbox E3 2018 Briefing with a thrilling engine demo that provides a glimpse into the future of the Halo franchise, leading it into new and unexpected directions.

Get ready for a serious Halo statue in this Halo Master Chief Premium Format Statue. Master Chief comes to life in this limited-edition Master Chief Figure. There are only 750 made. The display base is designed to look like the surface of the Ringed Planet […]

This Halo 18″ Master Chief Action Figure is ready for deployment. This is one serious figure standing 18″ tall. That’s one and a half feet of Master Chief for your collection. Master Chief has over 30 points of articulation and comes with game-accurate accessories. It […]

Now you can look just like Master Chief from the Halo games when you ride your motorcycle thanks to this Halo Master Chief Limited Edition Motorcycle Helmet Replica. This helmet meets DOT standards and has an eyeglass friendly interior. This detailed replica of Master Chief’s […]

For many Halo fans, teabagging is just as important as a team victory…it may even be more important for some of you 🙂 If you know someone like this, or you’re a proud teabagger, then this Halo Teabaggering T-Shirt is for you. Just when you […]

This Halo 4: The Essential Visual Guide Hardcover Book is well named because it is essential reading for true Halo fans. It features detailed sections about the characters, factions, weapons, vehicles, locations and more. You get 232 pages with annotated artwork that spans the entire […]

Halo fans, this should be your next purchase. This Halo 4 Master Chief ArtFX+ Statue is ready for battle! This 1:10 scale statue depicts Master Chief himself from Halo 4. He features 10 points of articulation, giving you more posing options than the standard ArtFX+ […]

Fans of the Halo franchise of games will want to get their hands on these Halo 4 Action Figures, which look pretty awesome. These 6″ action figures each have at least two dozen moving parts. You can choose from Master Chief, Didact, Elite Ranger, Spartan […]