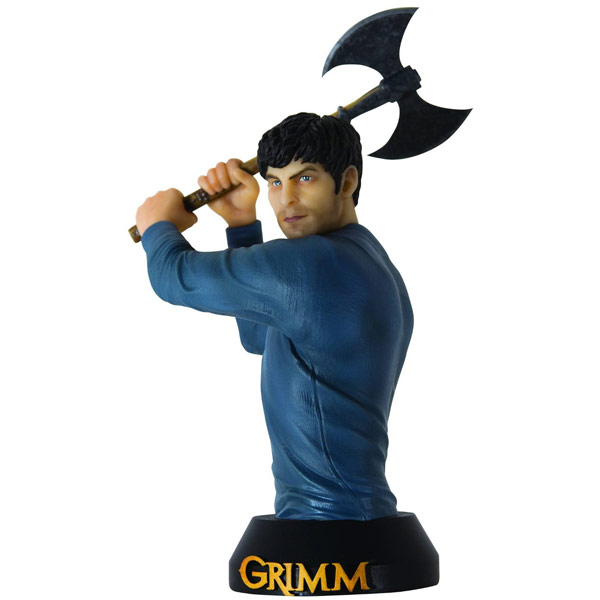 If you plan on reading fairy tales any time in the near future, you might want to consider getting the Grimm Nick Burkhardt Bust because, as the hit NBC show reveals, fairy tales can be dangerous.

The big bad wolf, along with an army of other supernatural creatures, walk among us, looking for their next meal, and only the Grimm has the power and weapons to stop them.

This 8 1/2-inch tall bust features a likeness of Nick Burkhardt, as portrayed by David Giuntoli. The popular television series has shown that not all supernatural creatures are evil but there are enough out there that occasionally require pulling out the big double-bladed axes. The collectible is a limited edition piece but there’s info at this time on the exact number of busts that will be available.

The Grimm Nick Burkhardt Bust is expected to be available February 2014 (so hopefully any day now) but it can be pre-ordered for $64.99 at Entertainment Earth. Also at Amazon.co.uk.

Want to become a Grimm like Nick Burkhardt but don’t want to waste time with dusty old books? The Grimm Wesen T-Shirt will teach you about some of the beasties living among us. Nick’s library of weirdness appears in almost every episode of Grimm, with […]

If you are a fan of the TV show Grimm, this Grimm “Book” Journal will be a book that you can’t put down. This leather-look journal is made to look like one of the Grimm Diaries. It features lined pages with sketches of monsters and […]

The man who always has a plan explodes onto the scene like a dropped F-bomb as the Nick Fury Sixth-Scale Figure. He might not drop the ‘F’ word in the Marvel Universe but Samuel L. Jackson still brings the attitude as the man in charge, […]

If you have a little girl, or just like cute things yourself, you need this Hello Kitty Sugarplum Fairy Plush Christmas Stocking. Covered in white furm sparkling crystal gems, and embroidered snowflakes, this Christmas stocking features Hello Kitty as a sugarplum fairy. Although it is […]