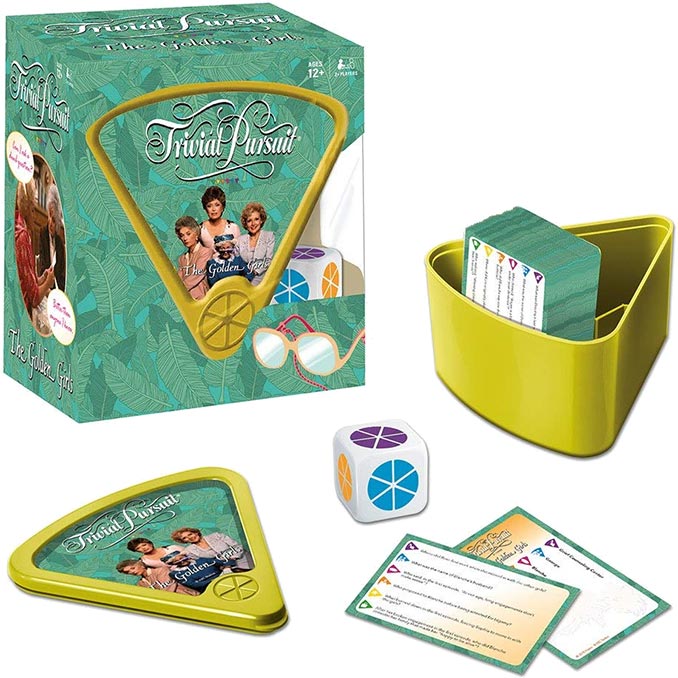 The final episode of The Gold Girls aired on May 9, 1992. However, thanks to the wonders of syndication and streaming, many of us have it much fresher in our minds. See how much you know about Dorothy, Rose, Blanche, and Sophia with Golden Girls Trivial Pursuit.

This game, from USAopoly, features 600 trivia questions based on all seven seasons of The Golden Girls, the Emmy Award-winning TV series that entertained audiences through the late 80s and early 90s. In this game, the categories aren’t things like Science, History, or Geography, and instead you have categories centered around the show such as The Ladies, Who Said It?, Family Matters,  Locations, Men of the Night, and Words of Wisdom.

Remember the episode where Dorothy tries out for Jeopardy? Well, if you do, it’s your turn to shine with all your knowledge about the Golden Girls themselves. Taken from across all seven seasons, these 600 questions quiz you on all aspects of the show. You don’t have to deal with questions about Geography or Sports & Leisure. Instead the categories are The Ladies, Family Matters, Who Said It?, Men of the Night, Locations, and Words of Wisdom.

We’ve all played Trivial Pursuit, but I bet you’ve never played it with the Griffins. Now is your chance, with the Family Guy Quick Play Collector’s Edition Trivial Pursuit. Get to know everything about the Griffin Family. This game was created with fans in mind, […]

Think you know everything there is to know about Doctor Who? Test your knowledge with Doctor Who Trivial Pursuit. You might find out that you don’t know nearly as much as you thought you did. Sure you know the easy stuff. Who is Rose? What […]

The Trivial Pursuit Master Edition Game will put your knowledge to the test with over 2,950 trivia questions across 6 categories. It’s a great party game. You’ll only collect all 6 wedges and win the game if you can come up with the answers. You […]