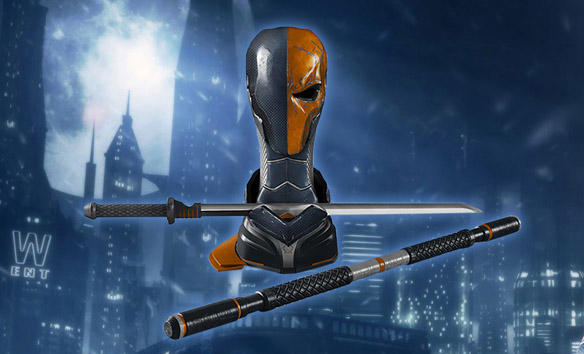 The Deathstroke Arsenal Prop Replica lets you get your hands on some of Slade Wilson’s goodies, and you don’t even have to fight him over them.

In Batman: Arkham Origins, Deahtstroke is hired to kill Batman on Christmas Eve, and he knows the Dark Knight isn’t exactly a lightweight so he’s armed with his trusty sword and ballistic staff. If you’re a fan of the character, you know you need this… even if you didn’t know who the guy was until he appeared on Arrow.

The Deathstroke Arsenal Prop Replica will be available Aug 2016 – Sep 2016 but it can be pre-ordered now for $850 at Sideshow Collectibles.

Things are getting hot in Gotham City as Harley Quinn leaves Mr. J to spend some time with Mr. D on the Deathstroke and Harley Quinn T-Shirt. In Deathstroke #5, Slade Wilson AKA Deathstroke trades punches with Batman in what some consider to be the […]

Get ready for one of the most lethal mercenaries in the DC Universe with the Deathstroke Premium Format Figure. Standing 19-inches-tall and dressed in his iconic blue and orange costume, Slade Wilson (not to be confused with Deadpool’s Wade Wilson) is ready to take on […]