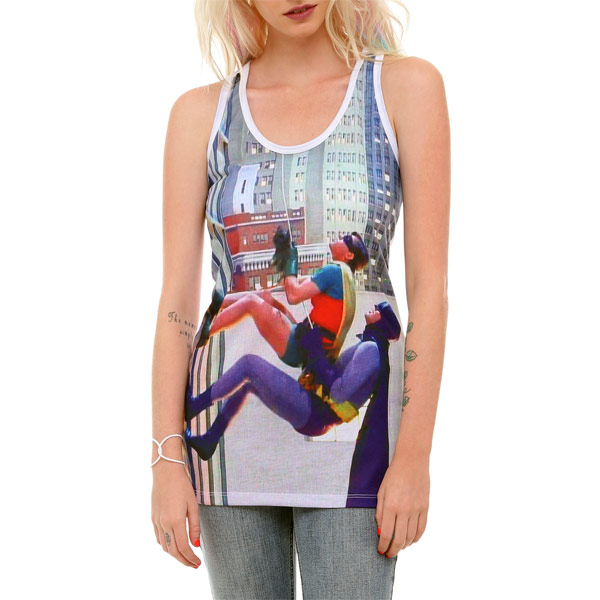 The latest Batman movies to hit the big screen had plenty of excitement, but an iconic activity failed to show up in any of the films. Fortunately, the DC Comics Batman ’66 Climb Girls Tank Top allows this retro scene to be enjoyed by today’s Bat-fans.

The 1966 Batman series featured a lot of camp, ranging from big-screen actors chewing scenes as members of Batman’s rogue gallery to the Bif’s and Kapow’s that did their best to make the show like a live-action comic book, and almost every episode included a scene with Batman and Robin scaling the side of a building, usually while exchanging cheesy dialogue with each other.

That scene lives again with a sublimation print of the Dynamic Duo walking up the side of a building as they wage war against the forces of evil in Gotham City.

Put the Oooof! in your wardrobe with the retro-style DC Comics Batman ’66 Climb Girls Tank Top for $20.50 at Hot Topic.

This little robot has suction cups built into its feet, allowing it to climb up, down, around, and upside down smooth surfaces like windows and mirrors. The [email protected] REX (Robot EXplorer) requires 2 x AAA batteries, measures 4.5 x 4 x 3.75 inches and is […]

The Clown Prince of Crime and his main squeeze get close like never before on the Batman Harley And Joker Face Girls Ringer Tank Top. Joker or Harley Quinn? There’s no need to choose because this 50% cotton / 50% polyester tank top lets you […]

Ladies, are you ready to get your Chewie on? The Star Wars Chewbacca Tank Top is the perfect getup for female Star Wars fans. Made from a blend of cotton and spandex, this tank top will turn any sexy woman in to a hairy-looking Wookiee. […]

Buffy Summers has two talents – slaying vampires and speaking cool lines like the one on this Buffy The Vampire Slayer Girls Crochet Tank Top. Inspired by the episode, Prophecy Girl, this 95% rayon / 5% spandex black tank top features the quote, ‘I may […]

Wear an awesome comic book cover with the Marvel Spectacular Spider-Man Issue #200 Girls Tank Top, and remember when the Green Goblin was actually cool. Hollywood has tried twice to ruin the Goblin on the big screen, with the last outing leaving a particularly bad […]