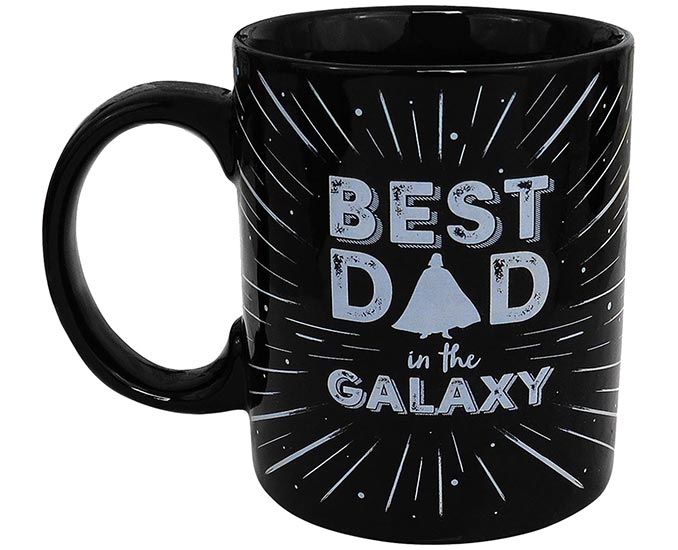 If “Father” sounds a bit too formal, you might want to get this Darth Vader Best Dad In The Galaxy Mug as a Father’s Day gift instead of the Best Father In The Galaxy Mug. Like that one, this is officially licensed Star Wars merchandise and made of ceramic. It reads “BEST DAD in the GALAXY” with the letter A in DAD formed out of the silhouette of Darth Vader with his cape spread.

He is your father and he deserves some caffeine for dealing with you. Get him this mug from Star Wars! The black ceramic mug has a “Best dad in the galaxy” text design with an image of Darth Vader.

This black Star Wars mug conveys its Darth Vader appreciation with the words “BEST DAD IN THE GALAXY” surrounded by stars streaking infinitely through a Hyperspace tunnel.

Oh, and the “A” in “DAD” is shaped by the caped silhouette of Darth Vader. Clever, eh?

If dad’s a Star Wars fan, this Darth Vader Best Father In The Galaxy Mug would make a great Father’s Day gift. It’s coming up fast, on June 17, so now is a perfect time to pick something out for him. This Star Wars Darth […]

Father’s Day is coming, and if dad doesn’t drink coffee, that Best Father In The Galaxy Mug won’t do. Another option for the Star Wars fan is this Darth Vader: Best Dad In The Galaxy Mouse Pad. It features a profile of Darth Vader and […]

This Star Wars Darth Vader Pinache Ceramic Mug is perfect for your morning coffee. Especially if you take it black as the dark side. It features Darth Vader’s helmet in gold under falling Imperial logos and hearts. That is a classic design. It makes a […]