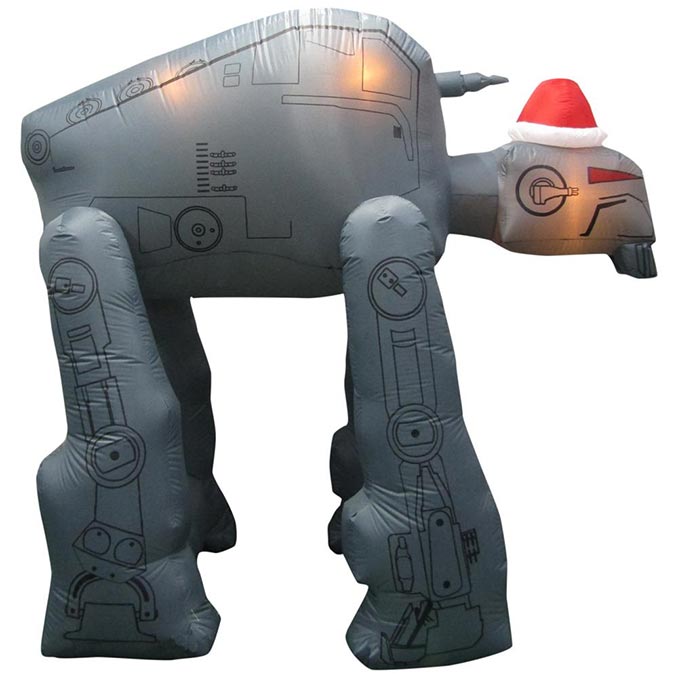 Decorate your yard this Christmas with this giant Inflatable Star Wars AT-M6 Walker. It stands 8 feet tall, wears a Santa hat, and lights up with energy-efficient LEDs. Set up is fast and easy—just plug in and it self-inflates in seconds.

While many of us are more familiar with the AT-AT (All Terrain Armored Transport) Walkers that debuted in The Empire Strikes Back, AT-M6 (All Terrain MegaCaliber Six) Walkers are their much large counterparts that appeared in Star Wars: Episode VIII The Last Jedi. Sometimes they are called First Order Heavy Assault Walkers, but are more commonly known as Gorilla Walkers.

Make a singular statement with this giant Airblown Inflatable Gorilla Walker decked out in a Santa hat. Delight children and adults alike with this Star Wars holiday decoration that self-inflates in seconds and includes energy-efficient LED lighting for nighttime visibility. No assembly required. Plug it in, stake it down and watch the magic unfold.

Buy the Inflatable Star Wars AT-M6 Walker for $149 at Home Depot. It’s a hot item that is already on backorder (order now for mid-September delivery), so order today to make sure you have it this Christmas.

The weather’s starting to get chilly, and the Christmas spirit is slowly creeping its way into the hearts and minds of everyone. If you’re the type who clocks in long hours of overtime at the office or spend most of your days running around busy, […]

Nobody’s ever too old for plush toys. They come in all shapes, sizes, and colors. Aside from that, they now come in various forms, from plain plush toys to keychains to pillows. And now, they even come on shoes too, like the gorilla on these […]

Well, Christmas is nearly here and it is never too soon to think about how you will decorate for the holiday. And you have to geek things up. With that in mind, this Star Wars Yoda Lighted Inflatable Christmas Santa should do nicely. This Star […]

Remote control toys are fun. RC toys that are all-terrain, transform fro tank to robot, and fire missiles like this Air Hogs Robo Trax Transforming All-Terrain Tank are insane! With its all-terrain tracks, AirHogs RoboTrax can drive over rugged surfaces including rocks, gravel, sand, and […]