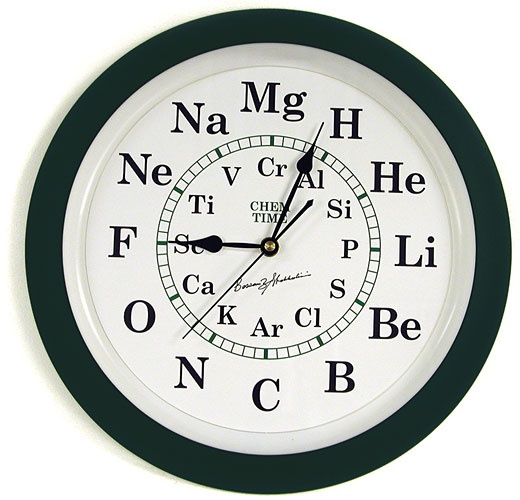 The Chemistry Clock is the ultimate wall clock for the modern scientist. But if you’re more old school and find things that feature a vintage look more attractive, then you might prefer this version of the Chem Time Clock instead.

Like the other one, the Chem Time Clock doesn’t have numbers on its faces. Instead, you’re supposed to tell the time by reading it off from the elements, based on their atomic numbers.

The idea for this quirky and extremely geeky wall clock came from Professor Bassam Shakhashiri who was an instructor at the University of Wisconsin. The professor himself had one such clock made during the summer of 1983, which he eventually had installed in his classroom.

Take a page from Professor Shakhashiri’s book by getting one of these Chem Time Clocks for your own classroom. They will be available starting March 2012 from Teacher Resource for $34.95.

Mathematicians had the Chalkboard Math Clock, engineers had the Graph Paper Equations Clock, and now chemistry majors and nuclear scientists have the Chemistry Clock. Each number from one through twelve on the clock face uses the element of the corresponding atomic number, and displays information […]

Maybe you’ve learned how to use Real Science to Make Great Food, and now you need the kitchen accessories worthy of a scientist. What you need is this clever Chemistry Spice Rack Set. It features 14 chemistry lab themed spice containers with labels designed to […]

All our other products for Pi Day this year have been things you wear, but there is plenty of other items that feature Pi.  In fact, one of my favorites is the Pizza Pi Cutter GeekAlerts posted about 2 years ago.  Another one I like […]