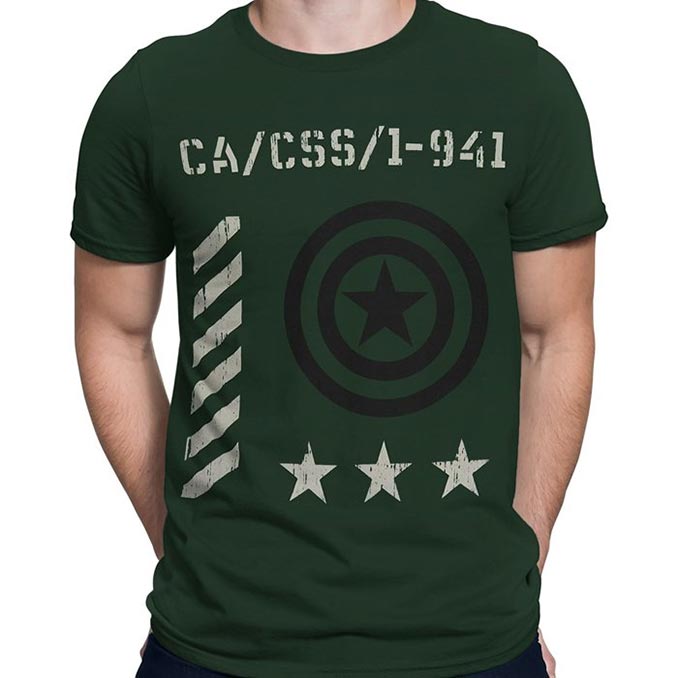 Captain America debuted in comic books back in 1941, which is why this Captain America Vintage Military T-Shirt makes so much sense. It’s a 100% cotton military green t-shirt with a design that fits well with the World War II era in which Captain America originally fought. With writing that looks like stenciled military text from WWII and the military stripe design, you have the vintage military style merged with a subtle Captain America shield logo to bring it all together.

This Marvel Captain America Vintage Military Army Bi-Fold Wallet is a good looking wallet that is perfect for any Captain America fan. The wallet is made of canvas and features a vintage military design with Captain America’s shield right in the middle. It measures about […]

This Marvel Captain America Vintage Military Army Backpack lets you carry your school stuff in a backpack that looks like it is from the military. You will love the style and the fact that it holds all of your stuff. It is perfect for fans […]

All you military geeks out there who have the iPad2: here is a protective Gumdrop Military Edition iPad 2 Case to match your gear.

If you’re a fan of vintage cameras or military equipment, then you are going to love the Gizmon iCA Military Edition iPhone Case. Designed to look like Leica rangefinders used by Military Photographers, this iPhone 4/s case will take you back in time every time […]