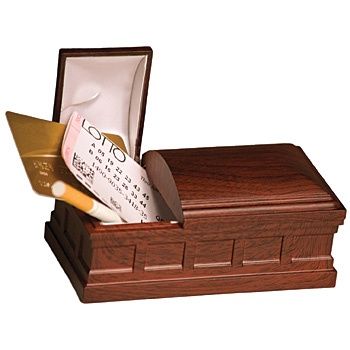 How often have you wanted to bury a habit but found that you just couldn’t? But there’s a reason why that’s called a “habit”–you weren’t born with the tendency or urge to do whatever it is you want to stop. And that’s good news, because you can stop making that habit a habit, with a whole lot of effort and many more reminders, including those coming from the Bury The Habit Recordable Coffin.

The Bury The Habit Recordable Coffin is a quirkily shaped recorded in the shape of a coffin. Want to stop smoking? Quit drinking too much? Stop shopping and charging everything to your credit card? Then record a short note telling yourself to do just that and lift the lid of the coffin up ever so often to remind yourself that it’s time to quit and bury the habit. 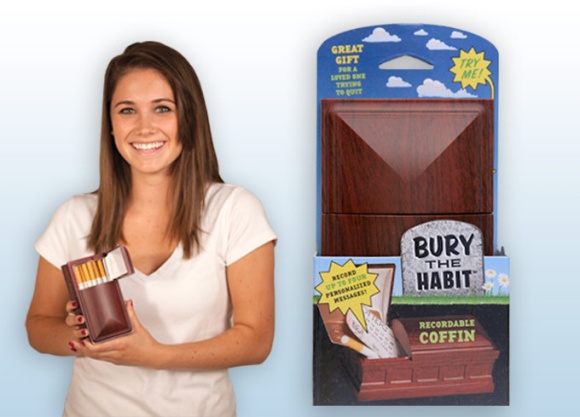 The Bury The Habit Recordable Coffin has arrived to help you and your friends and loved ones finally put to rest all your annoying bad habits, addictions or things that you or they do that drive people crazy. Simply press the button and record up to 4 personal messages into the coffin. Maybe it’s to quit smoking or stop texting while driving. Then, every time the lid is lifted, the messages are played back as motivating reminders to stay the course and start living life unburdened by the things that are keeping you all from being shiny happy people.

The Bury The Habit Recordable Coffin is available from Baron Bob for $18.95.

Send your message loud and clear the moment the recipient of your card or letter opens the envelope with these Talking Recordable Envelopes. Cards that blare out a melody or special message once opened began using this concept ages ago, but their bulkiness makes it […]

Christmas may long be over, but the warm and fuzzy memories of nights spent with friends and family will linger on. So will the nightmares–the ones that come before Christmas, that is, especially if you’ve got the Nightmare Before Christmas Coffin Watch on your wrist. […]

It’s Halloween and the event that you are attending is boring as anything. There’s no alcohol. You need a drink. No problem. Just pull out your handy Coffin Embalming Fluid Flask. It’s perfectly themed for Halloween with a skull and bones and the words Embalming […]

You’ll feel like doing the Monster Mash when you’re carrying the Rock Rebel Universal Monsters Coffin Backpack. Frankenstein and his Bride. The Creature from the Black Lagoon. Dracula and the Wolf Man. They’re all here to help you carry your things. Who knew the Universal […]

Nightmare Before Christmas fans love their merchandise, so they are sure to love this Jack and Sally Coffin Watch, which puts the characters on your wrist and is of course, shaped like a coffin. The watch measures 9-1/2″ x 1-1/2″. The watch face is 1-1/2″ […]

This Nightmare Before Christmas Jack Skellington Coffin Action Figure shows Jack resting in his coffin. This action figure has a variant facial expression, updated coffin, and the same real clothes and poseable skeleton body! He looks scary, but cute. He is going to display nicely […]

Be just like Peter Quill and carry Star Lord’s Walkman with Headphones – Retro Recordable Player everywhere for whenever you need some rocking tunes. It is not technically a Walkman since it has been updated with more modern technology. You can connect your phone or […]

Whether you are goth or just taking a walk on the dark side, this Mini Coffin Purse is perfect for that bit of extra creepiness that you want in an accessory. Buy one for your little ghoul today. It’s stylish and spooky with a soft […]