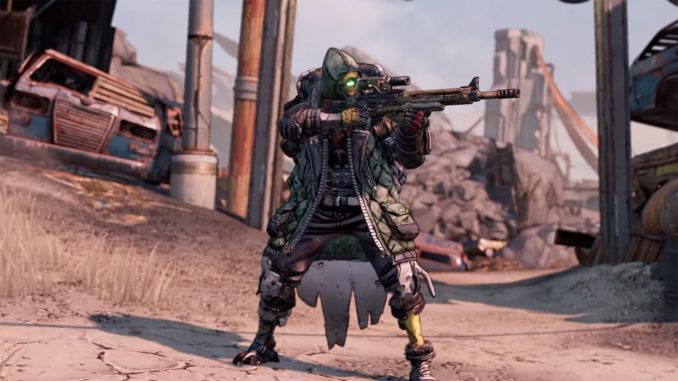 If you’re excited about the upcoming release of Borderlands 3 on September 13, 2019, you’ll want to check out the Borderlands 3 “The Hunt” FL4K Character Trailer.

FL4K, also known as Beastmaster, is a wandering robot with three loyal pets that they can choose from to bring to battle to attack enemies and buff stats. “Their action skills let them send forth dive-bombing Rakk, teleport Gamma Burst-irradiated pets through rifts, and even Fade Away to temporarily become invisible while moving faster and regenerating health.”

Meet FL4K, an emergent AI whose three loyal pet companions help them track and claim their quarry on a never-ending hunt across the galaxy.

FL4K the Beastmaster is on a never-ending hunt in Borderlands 3, accompanied by loyal beasts who are eager to please them. This robotic leader of the pack has access to both an Action Skill and an autonomous Pet that fights by their side and obeys commands to pounce on specific targets. Here’s a look at FL4K’s Hunter, Master, and Stalker skill trees, which give them and their Pet the killer instincts they need to overcome whatever the galaxy throws at them.

Borderlands 3 “So Happy Together” Trailer

Add some fun to your desktop with this Borderlands Claptrap Talking USB Hub. It’s a 4 port hub, and each port can be used for data and charging. It not only looks just like the Hyperion CL4P-TP general purpose robot from Borderlands, it also says […]