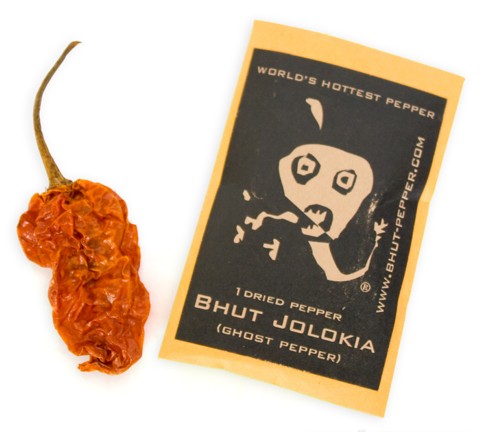 Here’s the pepper that is literally the king of all peppers: the Bhut Jolokia which is the World’s Hottest Pepper. Are you man (or woman) enough to take on the ghost pepper?

These peppers are so hot, that it’s recommended that you wear gloves even when you’re just handling it. Even the most daring of your friends will find the Bhut Jolokia a force to reckon with. It’s hot enough to make your eyes water even just by being in close proximity of the pepper. But it’s not just something for novelty purposes, either. It actually makes for a pretty good ingredient if you’re into cooking, and it’s even got some healing properties  as well. How’s that for hot?

Described as a smoky – almost melony – flavor, it’s a great accompaniment to salsa and meat dishes. Just be sure to use it in moderation! Scoville Heat Units are used to gauge the heat of spicy foods. Jalapenos score 3,000-6,000 SHU. Habaneros score 300,000 SHU. And the Bhut Jolokia? A staggering 1,041,427 SHU!

But the Ghost Pepper isn’t just for pepping up your chilli. For years it has been used to treat pains like migraines, arthritis, muscle pain and sinusitis. It contains Capsaicin, which is said to ease digestion problems, lower blood-pressure and boost energy levels. Hot and handy? That’s our kind of vegetable!

The Bhut Jolokia: The World’s Hottest Pepper is available from Firebox for $11 each and $24 for a pack of three.

Are you ready for a treat that is super-hot? Try these Ghost Pepper Super-Hot Candy Balls. These are made with Ghost Pepper Chili Powder and will likely be the hottest candy balls you’ve ever tasted. We aren’t kidding. They are over 1 million SHU of […]

Do you like your spices hot? Really hot? If so, try this “Well That Escalated Quickly” Super Hot Pepper Spice 3-Pack. Aside from freaking out and trying to cool down, you will have no choice but to utter the name of the product. Because that […]

Sharpen that salt and erase that pepper! Yes, you heard me right. There’s no mincing of words and they certainly weren’t gibberish–and you’ll totally get what I meant if you had these Pencil Salt and Pepper Mills on your table. Most people will probably be […]