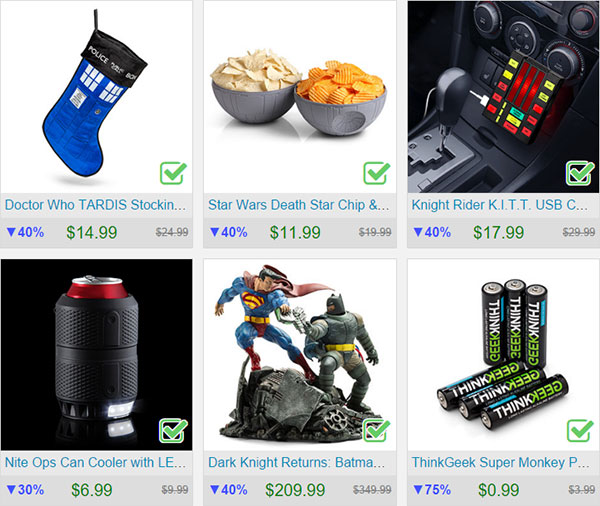 We recently introduced you to Rout, but I have discovered that it is so much more than described in that initial post. It is the way to find the Best ThinkGeek Deals as well as the best deals at hundreds of other online stores.

The secret is using the sub-navigation tabs to select what you want to see. For example, the ThinkGeek All Tab shows you the most recent products added to ThinkGeek. But just move over to the Fresh Deals tab, and you see items that are discounted recently sorted according to what is the best deal. Similarly the Hot Deals tab shows you the best ThinkGeek deals without regard to if the discounts are recent or not.

On the other end of the spectrum are the New Deals, which show you the products that most recently dropped in price at ThinkGeek.com. In between are the Cheap Deals, which apparently are the deals that are at the biggest discount off the list price.

If this was just for ThinkGeek it would be one thing, but what makes this so incredible is Rout.com lists hundreds of merchants and you can browse them all this way. It isn’t just merchants either, they have over 72 million products they are tracking and you can use these same sub-navigation filters on listings for all products, Cool Products, Nerd Products, search results, and more!

If you have a young child and an iPad or other tablet, chances are they are drawn to it. However, you can’t let them use it, as they could break your expensive electronics, and even worse, hurt themselves with it. Yet you would still like […]

If the Android-based Samsung Galaxy Tab is your choice of tablet, then this protective and travel-friendly leather case with a built-in Bluetooth keyboard might be something you want to take a closer look at.

How to Score 75% Off at ThinkGeek

A few days ago I showed you how you can use Rout to Find The Best Deals at ThinkGeek and hundreds of other online stores. It’s a fantastic way to browse millions of current deals at all the best online stores, but I left off […]

While other merchants like Dell and Tiger Direct have many different products on sale for Cyber Monday 2011, ThinkGeek.com is keeping it simple. The ThinkGeek Cyber Monday 2011 Deal is free shipping with no minimum purchase. Cashing in on this offer is simple. Go to […]

Today is Cyber Monday, the day to get the best deals with online shopping. Take advantage of the ThinkGeek Cyber Monday Deals 2015 and enjoy free shipping with no minimum order requirement plus 30% off on 50 awesome gifts. To get the deals, just head […]

One of our favorite online stores is ThinkGeek, so naturally we are excited about the ThinkGeek Black Friday Deals! There are many cool products on sale, and many of them are discounted by 33% to 50% off. Discounted products include Star Wars, Star Trek, Doctor […]

Find huge savings up to 50% off with ThinkGeek Cyber Monday Deals 2013. Why not kick-off your Christmas shopping with great geeky gifts, when you can get cheap prices and free shipping too! Don’t delay, because this sale and the free shipping promo codes expire […]

(Update: Shogasm.com is now Rout.com and this article has been updated to reflect the name change.) Over the past week we have introduced you to Rout.com and some of the features that will allow you to save tons of cash this holiday season. Now with […]

Thousands of the Coolest Products Online

Recently we introduced you to Rout–in particular all the awesome Geek Items that they list. However, the Cool Products Section is even better, and it’s where you can find Thousands of the Coolest Products Online. There’s such an incredible selection, along with awesome prices, that […]

Rout.com is the place to find the Best Cyber Monday Deals and the best deals every day of the year.  This site continually tracks over 100 million products from all your favorite stores including Amazon, Think Geek, Best Buy, Newegg, Target, Walmart, and hundreds more.  […]