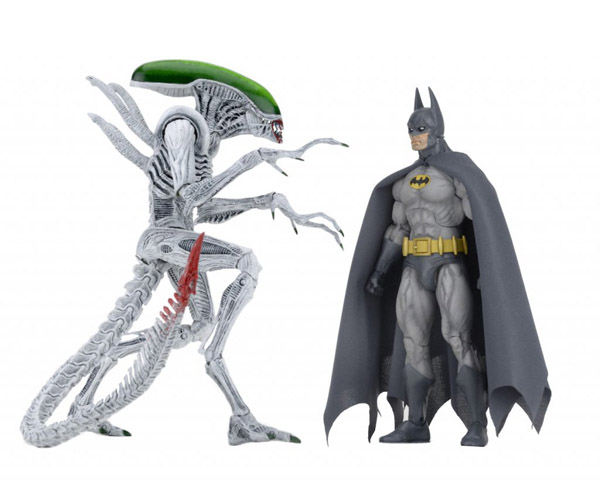 In 1997, the Dark Knight met the Alien xenomorphs in a comic book series put out by DC Comics and Dark Horse. Regular Aliens are bad enough, but in this series, special hybrid aliens were created using the DNA from some of the bad guys in Arkham Asylum. One such hybrid was the Joker Alien pictured here.

Both figures have over 30 points of articulation and stand about 7-inches tall. Batman has a fabric cape and the Joker Alien has a bendable tail.

You’ll find more great Batman deals than you can shake a xenomorph at on Rout.com.

The Aliens Alien Queen Hybrid Metal Figuration Die-Cast Metal Action Figure is incredibly detailed and features multiple adjustable fins on her back, a retractable head, and a spring loaded mouth piece! It is absolutely terrifying. It also has replaceable large and small hands, and a […]

It looks like this and it has been captured in this Alien vs. Predator: Requiem Predalien Hybrid Metal Figuration Die-Cast Metal Action Figure. This Predalien even has some hidden features like the second mouth and inner jaw. The main part of the body is made […]

The Alien Glow-in-the-Dark Alien Egg 6-Pack Carton is a must for serious fans of the Alien franchise. This glow-in-the-dark set features 6 eggs and 3 facehuggers! The packaging features glow-in-the-dark accents and is in scale with NECA’s line of 7-inch figures. These are going to […]