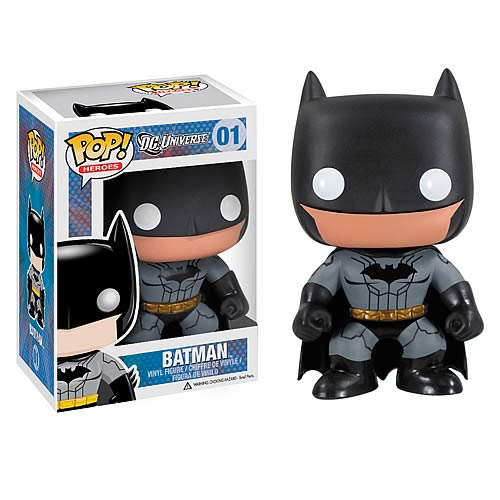 The New 52 look is all about the lines, baby, and this 3 3/4-inch tall Funko figure has plenty to spare. I’m not sure why someone at DC decided seams and piping were cool but everyone had them with the New 52 costumes, including the Dark Knight. Now he has pecs and abs on display, making the Joker and the other bad guys fear his punches even more. I’ve heard Batman can sometimes hit people so hard that words describing his punches appear out of thin air.

In addition to the iconic Pop! Vinyl style, the figure also has a rotating head.

The Batman New 52 Previews Exclusive Pop! Vinyl Figure will be available December 2015 but it can be pre-ordered now for $12.99 at Entertainment Earth.

Strike terror into the hearts of anyone looking to rob you with the Batman Arkham Asylum Batman Previews Exclusive Bust Bank. Measuring 8-inches tall and based on his appearance in the Batman: Arkham Asylum video game, the Dark Knight stands with his batarang at the […]

Don’t have any New 52 Pop! Vinyl characters? This looks like a job for the Superman New 52 Previews Exclusive Pop! Vinyl Figure. Standing 3 3/4-inch tall and wearing his New 52 duds (which have already changed again), the Man of Steel is ready to […]

Everyone is afraid of Cthulhu, but why be afraid of the ancient evil is all he wants to do is open your beer for you? I say embrace Cthulhu by using this Cthulhu Previews Exclusive Figural Bottle Opener. This bottle opener comes straight from sunken […]