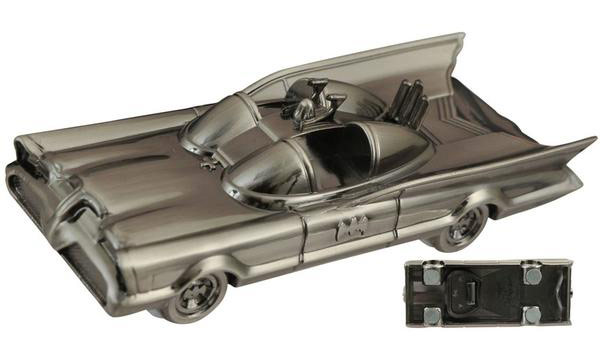 Holy refreshment Batman! This Batman 1966 Batmobile Bottle Opener will open all of your bottled drinks in retro Batman style.

Great for having a Bat-beer, a Caped Crusader Cola or a Robin approved Root Beer. This bottle opener looks just like the 1966 version of the Batmobile from the classic 1966 TV series. This 4-inch solid metal opener has magnets on the back too, so you can park it on your refrigerator door.

This cool bottle opener is only £16.99 from Forbidden Planet and $15.99 at Entertainment Earth. Pre-order it now for February of 2015.

Keep this Denture Bottle Opener away from people with real dentures because they’ll probably end up with a not-so-pleasant surprise in their mouths if you don’t. It’s kind of like the Switch Pop Bottle Opener in the sense that it’s a bottle opener designed and […]

Open your bottled beverages in style with this Batman 1966 TV Series Batarang Bottle Opener. It belongs in every utility belt. The Batarang serves many purposes, from grappling hook to boomerang to cutting tool, and now it is a bottle opener. Batman needs a cold […]

Fans of H.P. Lovecraft will enjoy this Cthulhu Bottle Opener. Sometimes you need a hand opening your bottle. Sometimes a tentacle or two. Or three. Cthulhu to the rescue. This novelty bottle opener is made from tough urethane resin with a solid steel bottle opener […]

Use this Batman: The Animated Series Batmobile Bottle Opener to open your bottles in style. It’s one of the coolest cars ever and now it will open your drink for you. This bottle opener measures about 4-inches long and is made of metal. It is […]