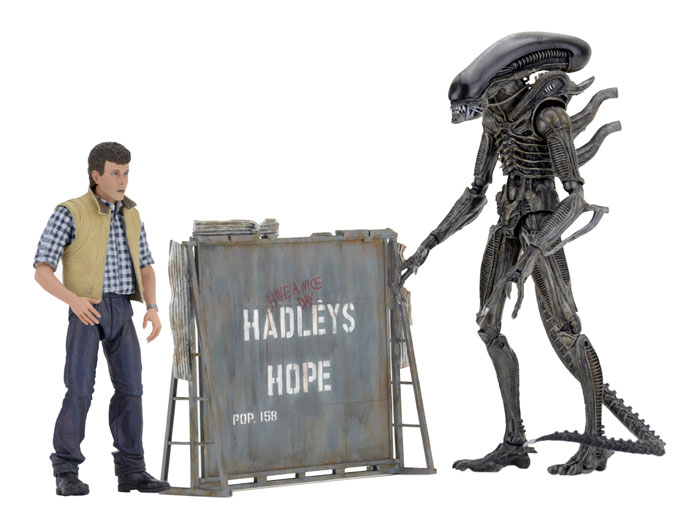 The Aliens Hadley’s Hope 7-Inch Scale Action Figure 2-Pack includes the first-ever Carter Burke with the likeness of Paul Reiser, a special edition Concept Aliens Warrior with Dome, and a replica of the population sign for Hadley’s Hope. It is a must for your Aliens collection.

Only $44.99 from Entertainment Earth.

The Aliens Albino Alien Concept 7-Inch Scale Series 9 Action Figure is NECA’s first concept figure from the 1986 movie! It was inspired by the original James Cameron screenplay. That screenplay describes an albino version of the Xenomorph that has an excreting probe in place […]

Get away from her you- This is the Alien Queen you have been waiting for. This Aliens Xenomorph Queen Ultra Deluxe Boxed Action Figure is huge. This action figure based on the Queen from Aliens stands over 15″ tall and is 40″ long. She is […]

This Test Tube Aliens Collector’s Pack is exactly what it sounds like. A coolector’s pack of test tube aliens. They may not have been grown in a lab, but they look like they were. They were born in a test tube, but it’s up to […]

Peggy Carter hides in the shadows on the Agent Carter Silhouette T-Shirt, and she manages to look stylish while doing it. Speaking of style, you’ll probably never be able to work the blue trench coat and red fedora as well as Captain America’s true love […]

Everybody loves snow globes. You shake them up and make the pretty scene snow. If you’ve ever wished that you could star in your very own snow globe, these Snow Dome Photo Frames will make your dream come true. Just add your own photos to […]

This Aliens 18-Inch Alien Warrior Action Figure is not only scary, but huge. He is ready to jump out from your collection in the dark and scare you to death. This figure is inspired by Kenner’s 1979 Alien monster figure. It has double-jaws and a […]