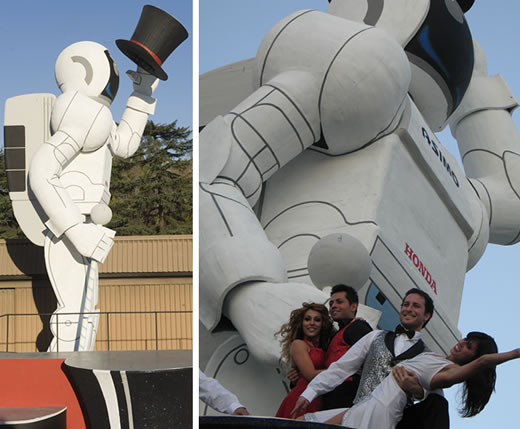 Honda has tested a 49-foot replica of their ASIMO humanoid robot, that’s 12 times the height of the original. The animated replica will be a guest of honor at the 120th Rose Parade as well as kick off Honda’s 50th anniversary of U.S. operations.

The creation called “Hats Off in Celebration” will be completed with natural materials like lettuce seed, rice, carnations and strawflower. The float will be joined by the Prairie View A&M University Marching Band, a past participant in the Honda Battle of the Bands featuring the music programs of Historically Black Colleges and Universities. 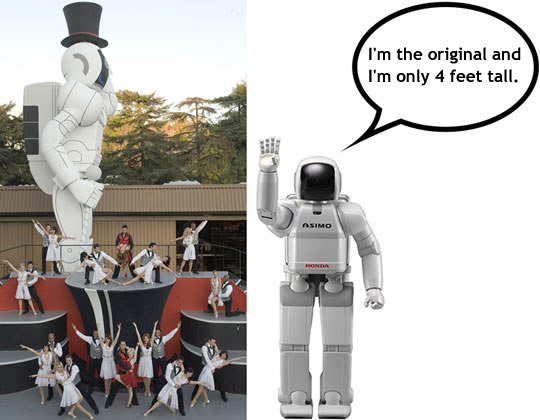 A few members of the band will ride on the float, which will be immediately followed by the entire marching band. In addition, during the parade the FCX Clarity pace car will be accompanied by the Honda Super Cub motorcycle, the first model sold in the U.S.

For more information about Honda’s ASIMO humanoid robot, head on over to honda.com and make sure to check out the official Honda YouTube channel.

Remember the news about the plans to let Honda’s humanoid robot ASIMO conduct the Detroit Symphony Orchestra? It looks like he did a good job: (This video is no longer available.) More cool videos can be found at the brand new official Honda YouTube channel. […]

At May 13 Honda’s humanoid robot ASIMO will be conducting the Detroit Symphony Orchestra as it performs “Impossible Dream” to open a special concert performance with renowned cellist Yo-Yo.