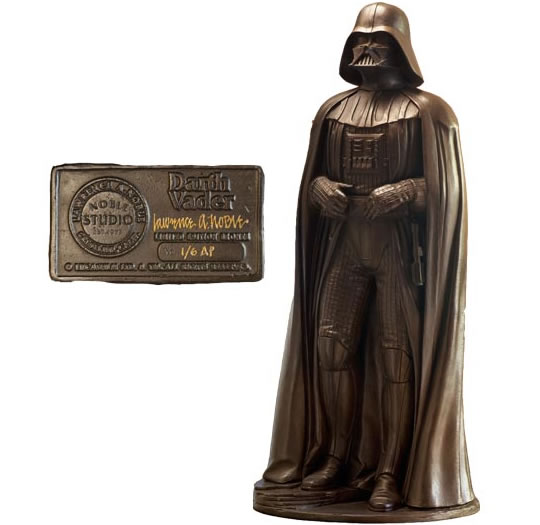 Like the now famous Yoda bronze adorning the Presidio fountain as well as Big Rock Ranch’s garden court entrance, the half-scale Darth Vader bronze is also being made available to the public in extremely limited quantities–30–exclusively through StarWarsShop.

The inspiration for this Vader bronze, which was modeled after the Dark Lord’s appearance in The Empire Strikes Back, ironically came from a source usually associated with the Star Wars prequels — the planet Coruscant.

“For me, the idea was to do the kind of statue we would see in honor and tribute to Lord Vader on the planet of Coruscant,” says Noble. “So if you were walking around the city on Coruscant and saw a statue of Darth Vader, it would hopefully be something along the lines of what we produced.”

If you enjoyed the $18,000 Darth Vader Bronze Statue that we wrote about a couple of months ago, this 7.75 inches tall $1,300 Yoda version should be right up your alley.

For many Star Wars fans, The Empire Strikes Back is as good as it gets and this limited edition Empire Revisited Deluxe Giclee captures all the excitement of that great movie on paper. Originally designed in 1979, the artist Lawrence Noble went back and created […]