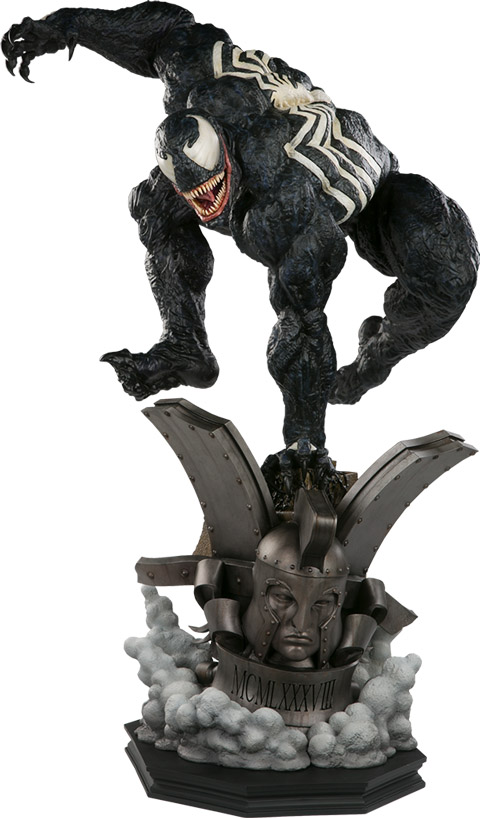 A symbiote leaps out of the comic books and into real life with the Venom Premium Format Figure.

He’s been a hero and he’s been a villain, and now Venom can be part of your Spider-Man collection with this 24-inch-tall statue that features a highly-detailed look at the non-zombie who has a taste for brains.

With an exploding base and a Spider-Man-like pose, Venom is ready to grab all the attention with two distinct looks – one featuring a somewhat normal look and one featuring the anti-hero’s more monstrous look that he adopted later, complete with slobbery tongue lashing out to taste the air… or maybe he’s tasting the fear of his enemies.

The Venom Premium Format Figure will be available Oct 2017 – Dec 2017 but it can be pre-ordered now for $624.99 at Sideshow Collectibles.

Trick or treat, give this symbiote something sweet to eat. As the Spider-Man Venom Creature Reacher, you’ll rule the neighborhood as Marvel’s popular anti-hero. You don’t have to worry about getting his monstrous appetite but you’ll have Venom’s look when you put on the over-sized […]

Peter Parker shows off some awesome moves with The Amazing Spider-Man Premium Format Figure as the Green Goblin attempts to blow the wallcrawler into tiny spidey bits. Spider-Man, wearing his classic costume, leaps over exploding pumpkin bombs, ready to shoot webbing at his opponent. The […]

Eddie Brock gets a new look with the Anti-Venom Statue. Villain, anti-hero, healer??? When a cancer cure unintentionally affects the symbiote remnants within him, Eddie Brock is transformed into Anti-Venom, with all of Venom’s wicked abilities but with the power to cure sick people added […]