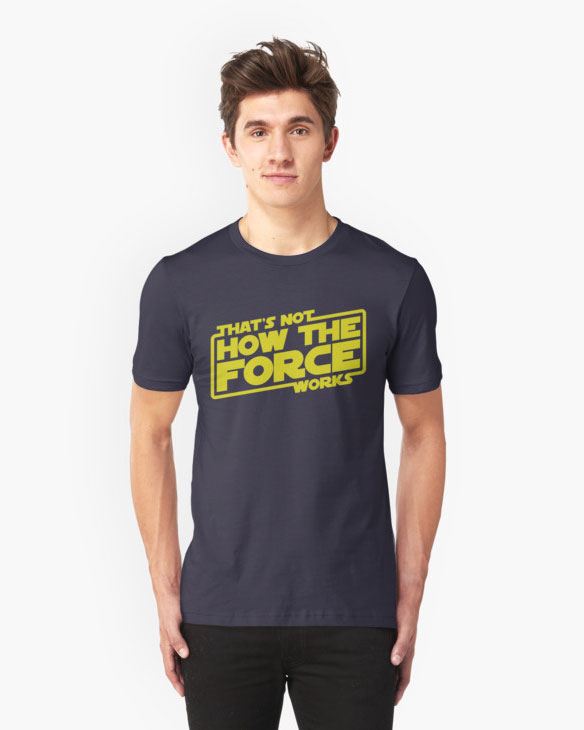 One of the best quotes of Star Wars VII can now be worn, thanks to the Star Wars: The Force Awakens ‘That’s Not How The Force Works’ T-Shirt.

Han Solo once referred to the Force as a hokey religion so you know things are rough when he’s your mentor on what you can and can’t do with the Force, but that’s exactly the situation Finn finds himself in when he suggests using the Force while on a mission to find Rey and disable the Starkiller.

The Star Wars: The Force Awakens ‘That’s Not How The Force Works’ T-Shirt is available for $24.80 at RedBubble.com.

He’s not Ron Burgundy but Finn lives up to the hype on the Star Wars: The Force Awakens ‘Big Deal’ T-Shirt. It’s hard to earn trust when you tell people you used to be a stormtrooper with the First Order but Finn takes it to […]

The Star Wars The Force Awakens Galaxy Rey Chiffon T-Shirt gives a great artistic vision of Rey’s future in Star Wars VII because it looks like the scavenger from Jakku will soon be living an adventure among the stars. She might normally dress in clothes […]

The original trilogy had Princess Leia and the prequels had Queen Amadala but the hero on the Star Wars The Force Awakens Rey Resistance Baseball Raglan T-Shirt proves that royalty isn’t needed to kick butt. She might just be a scavenger on the planet of […]

Have you felt a disturbance in the Force? That’s The Force Awakens T-Shirt calling out to you, needing you to wear it so its energies (the energies that bind the universe together) can flow through you. Now THIS is pod-racing! Oops!!! Wrong movie. THIS is […]