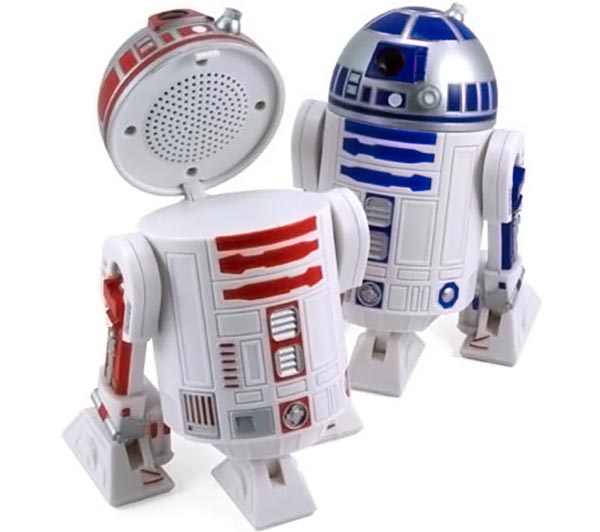 Last week we saw our favorite tin can astromech droid R2-D2 in the shape of a belt buckle. This week they have turned him and his red cousin R2-D1 into a nice pair of desktop speakers.

You get a two-droid set, R2-D2 and his red doppleganger R2-D1. Each features a flip-up head to reveal a speaker. Plug the stereo headphone style plug into your PC, iPod or spare Wookie for some droid-based sound. We won’t kid you, these speakers are not powered so their volume is limited by whatever audio input you give them. But don’t you want to help out a droid who’s down on his luck? 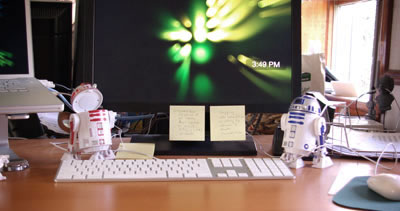 The Star Wars R2-D2 Speaker Set ($39.99) is available at ThinkGeek. (Update: Link removed because the gage is gone and no other stores were found with this product.)

If you’re looking for an audio speaker that is small enough to be portable, but offers large scale entertainment for all your daily needs, look no further than the Braven 6 Series Bluetooth Speakers. With three models to choose from (600, 625s & 650), you’ll […]

It’s patio time! You’ve got sunshine, fresh air and a ice-cold glass of lemonade. But something’s missing; the sound of music. (Not the movie/musical, silly!) The AQ Wireless Outdoor Speakers let you hear your tunes without worrying about your audio equipment getting destroyed by bad weather or having […]

Are you looking for a set of affordable computer speakers that will perform as well as they look? The Palo Alto Audio Musik Digital Multimedia Speakers offer a great balance between size, cost and functionality. Needing only a USB cable for audio power, these speakers […]

Although a notebook computer is supposed to be portable, it really is not practical to actually use them on your lap or in bed unless you have a solution like the Logitech Speaker Lapdesk N700. This laptop stand not only makes your laptop comfortable to […]

Do you ever have days when you feel like poking your eyes out? Splitterbot always has those kinds of days. Splitterbot’s black eye sockets are where you plug in two separate headphone jacks, so that two people can listen in on the same audio at once. Just pop his head off his […]

If you’re looking for cutting edge sound quality and style to match, look no further than the Palo Alto Audio Cubik Digital Speakers. Designed with the audiophile in mind, these speakers feature a 2.5 inch metal-cone full-range driver with full-digital amplification and lossless digital USB […]

Are you looking to get better sound quality out of your PC or Mac? You spent all that money creating the perfect playlist and probably enjoy Blu-ray Discs from your HD setup, but if you don’t upgrade your audio, you’ll still be missing out on […]