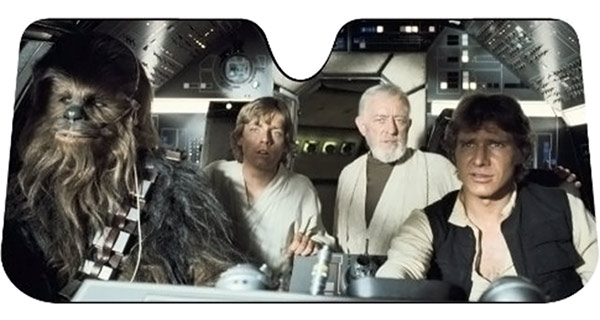 Just like before, this is one of those sun shades you put on the windshield of your car when you park outside to block out the sun and keep your interior cooler. Also like the previous one, this one transforms the interior of your car to look like the cockpit of the Millennium Falcon to onlookers. “She may not look like much, but she’s got it where it counts, kid.” 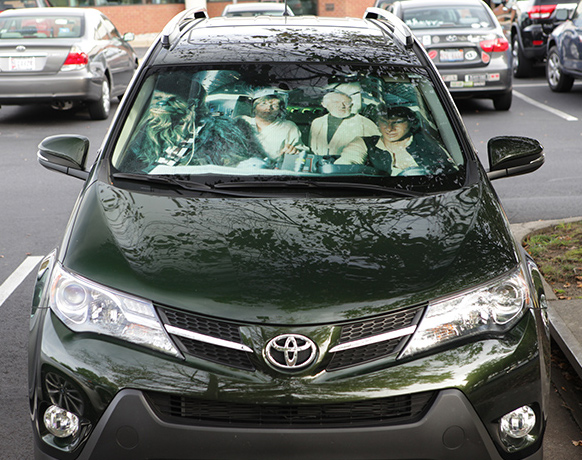 Maybe your Mitsubishi isn’t making the Kessel Run in less than twelve parsecs anymore. Or maybe it never did. Either way, it’s seen better days. When you show up to pick up that princess you’re dating, she’s all like, “You came in that thing? You’re braver than I thought.” It’s sort of a compliment, right?

Order the Millennium Falcon Windshield Sunshade for $19.99 from ThinkGeek. You can also order it one for $14.99 at Amazon.com.

When your car is parked it can look like the inside of Rick’s Space Cruiser with the Rick & Morty Windshield Sunshade. It’s sized (58″ by 27.5″) to fit the windshield of most cars, trucks, SUVs, and vans, and it helps keep the inside cool […]

This Millennium Falcon Windshield Sunshade will keep the interior of your car cool, while making it look awesome from the outside. It may not help your Corolla make the Kessel Run in less than twelve parsecs, but maybe it will look like it can. Sure, […]

We’ve seen other car sunshades that transform your car to look like the inside of another vehicle with famous passengers, such as the Millennium Falcon, Snowspeeder, Batmobile, and Star Trek versions. Now you can make your car look like it’s filled with the whole Belcher […]

Things getting too hot? This Spider-Man Windshield Sunshade will help. It will keep your car safe from the sun’s rays while geeking up your car. This collapsible shade pops in and out of place easily and fits most cars. It measures 27.5″ x 58″. Show […]

What makes an incredibly tiring day at work even worse is getting to your car and noticing that there’s bird poop on your windshield, or some other messy gunk that’s muddying up your windshield. Without thinking and almost automatically, you switch the wipers on–only to […]