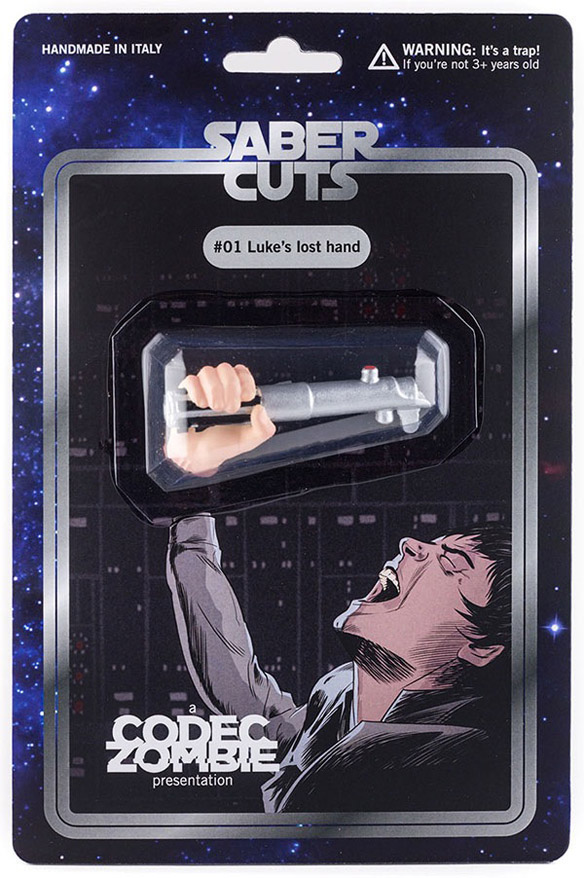 Some incredibly disturbed person watched the Star Wars films and thought, ‘Wow, those wacky Jedi and Sith sure do lop off a bunch of body parts. Maybe I’ll make a new toy line featuring those parts.’

Sounds insane, doesn’t it? But that didn’t stop it from happening. Say hello to Saber Cuts, dedicated to all of the lightsabered limbs from the whole epic saga.

Rather than start with Episode I, or even Episode IV, Saber Cuts starts with the most shocking cut of all – when Darth Vader chopped off Luke’s hand in The Empire Strikes Back. The hand is even still clutching Luke’s lightsaber.

Just imagine all the body parts that might soon be part of this twisted line.

Forgo with the traditional Christmas tree topper and look for something more your style; make it a Star Wars Christmas! This Yoda with LED Light Saber Tree Topper will go perfect with your Yoda & Darth Vader Stockings, Yoda Light Set, and Boba Fett Christmas […]

This Star Wars 40th Anniversary Use the Force, Luke 1000pc Puzzle features Luke in his X-wing, ready to launch the torpedoes into the Death Star. It is a 1000 piece puzzle that captures the magic of the moment as Luke navigates the Death Star trench. […]

These Star Wars Luke Skywalker’s Lightsaber Stainless Steel Stud Earrings are beautiful miniature recreations of Luke’s lightsaber. They are made from stainless steel with the saber blade colored gold. They are stylish and geeky, a must have for Star Wars fans! These earrings each measure […]