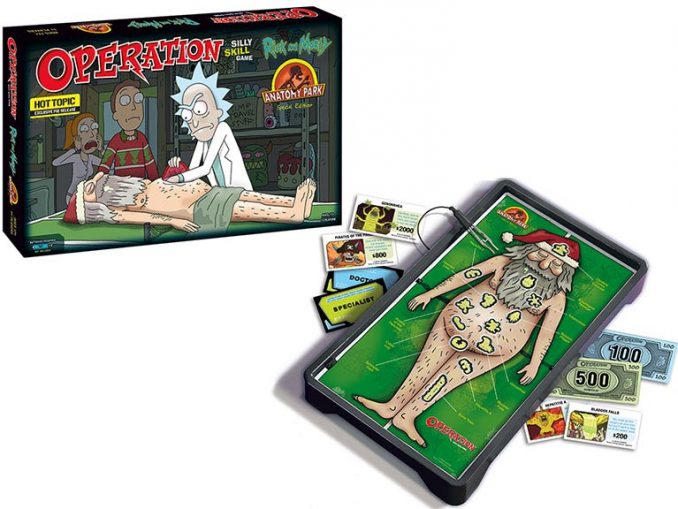 In this version, Rick needs help operating on his “old friend,” Ruben, a homeless man in a Santa outfit, who if you recall from the episode, had the Anatomy Park theme park inside of him. Some of the Funatomy parts match up to names of rides from the theme park, such as Pirates of the Pancreas and Haunted Liver.

Rick needs help operating on his “old friend” in this edition of Operation. Try to salvage Anatomy Park’s anatomical attractions and attempt to save Ruben from certain demise at the same time! Some of the “Funatomy” parts include: Pirates of the Pancreas, Haunted Liver, Bubonic Plague and more!

Initially, the Rick and Morty Anatomy Park Edition Operation Board Game will be available exclusively at Hot Topic and BoxLunch. Eventually, it will be released to other stores.

Fans of human anatomy will have fun leaving notes for others with this cool Anatomy Body Sticky Notes Collection. This 9 pack gives you 100 sheets per pack. You might even learn something about the human body. Why wouldn’t you want body parts on your […]

Rick & Morty: The World According to Rick Book

If you can’t get enough Rick Sanchez from Rick & Morty, you’ll want The World According to Rick Book. It’s filled with 160 pages of his quotes along with color illustrations from the show. You have his funniest line, witty observations, insane ramblings, and angry […]

Wanna know how a shark works? Want to see inside? No need to go try to catch one and get bitten in half. Just get this Great White Shark 4-D Vision Anatomy Model Kit. It will show you how a Great White ticks. You can […]