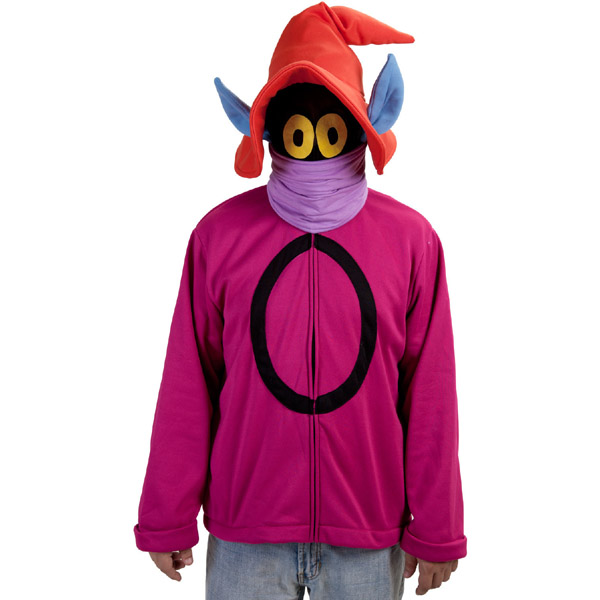 Get ready to work a little magic with the Orko Costume Hoodie and test the 80’s knowledge of your friends as you become one of the most powerful wizards of Trolla.

Poor Orco has it worse than anyone else on Eternia… and that’s saying a lot after you consider that Skeletor doesn’t even have a face. Of course, I’m not sure Orko has a face, either.

While he might’ve been a powerful mage on his own world, Orko’s magic was less than reliable after he showed up in He-Man’s territory. Fortunately, he was always able to provide some handy life lessons after each cartoon adventure, so he was useful even without his powers working correctly.

This colorful hoodie lets you transform yourself into the free-floating magician with a little help from attached blue ears, a see-through black mesh face mask with Orko’s eyes sewn on it, a removable purple neck scarf, and a foam-lined orange hat… complete with ear holes.

The great thing about the hoodie’s design is that you can wear it in a variety of ways, going from full-fledged Orko to just somebody wearing a very bright hoodie with a big, black ‘O’ on it.

The Orko Costume Hoodie is available for $65 at 80sTees.com.

Just like a Superhero, you can have a secret identity with this Iron Man Costume Hoodie. If you want a disguise, just put it on and put up the hood. Bam. You are now Iron Man. This officially-licensed Iron Man hoodie looks like it came […]

One of the few good things about winter is that you get to wear all your warm hoodies. GeekAlerts has shown you plenty of themed hoodies in the past, like the Minecraft Creeper Hoodie, Deadpool Hoodie, Darth Vader Hoodie, R2-D2 Hoodie and many others, and […]