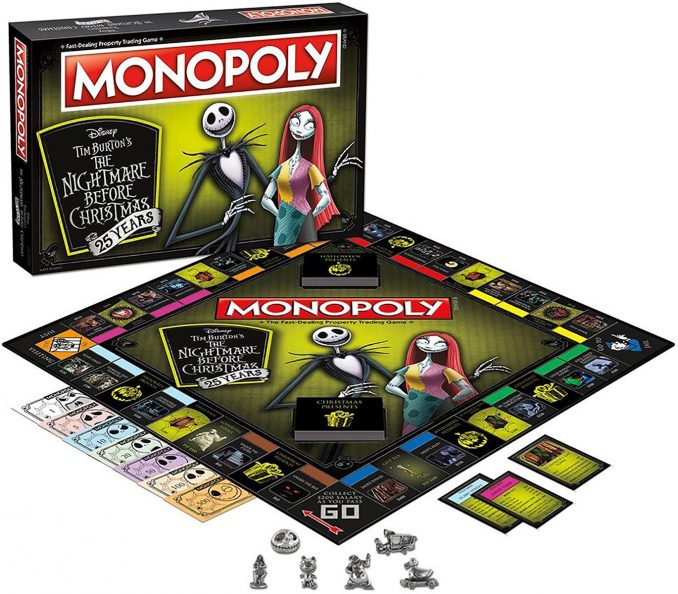 One of the coolest features of collectible Monopoly board games from USAopoly is the custom character tokens. These ones look incredible and you get 6 terrific designs: Jack’s Skull, Sally, Evil Teddy, Zombie Duck, Oogie Boogie, and Mayor’s Hearse. For Nightmare Before Christmas, Community Chest cards are renamed “Christmas Presents” and Chance cards  are called “Halloween Presents,” while houses are “Toys” and hotels are “Assembly Lines.”

Get a metacarpal grip on six metal tokens sculpted after unforgettable characters and subtle symbols from the film, such as Jack’s Skull, Evil Teddy, Sally, Oogie Boogie, Zombie Duck, and Mayor’s Hearse. Fans delighted by the film (and anything Nightmare-themed) will travel across a stylish game board to encounter familiar locations like Dr. Finkelstein’s Laboratory, Sally’s Alley, Oogie Boogie’s Casino, and Jack’s Tower, each with custom Title Deed cards and costs for their strategic consideration!

Among the properties players can collect and own are “Toys” and “Assembly Lines” that will rack up Jack Skellington-faced Monopoly money. Community Chest and Chance cards renamed “Christmas Presents” and “Halloween Presents” will open up opportunities for everyone to capitalize on both occasions.

Soundtrack lyrics and catchy quotes will come to mind as though the movie was just released, because the references don’t stop at the whimsical game components. A speed play option provides risk takers an alternative mechanic that still conjures the spirit of the film in around 60 minutes.

Nightmare Before Christmas 25th Anniversary Monopoly is $39.99 and is available at ThinkGeek.com and Fun.com.

Jack Skellington and Sally get most of the attention in Tim Burton’s The Nightmare Before Christmas movie, but we all know that it’s Oogie Boogie that you have to watch out for. If you like to live dangerously and enjoy scary, but oddly cute, characters, […]

Are you in need of a cool set of coasters for those Atari Pint Glasses?  How about The Nightmare Before Christmas Wooden Coaster Set which includes: Jack Skellington, Sally, Oogie Boogie Man, and Lock, Shock & Barrel.  Before you know it, summer will be over […]

Christmas may long be over, but the warm and fuzzy memories of nights spent with friends and family will linger on. So will the nightmares–the ones that come before Christmas, that is, especially if you’ve got the Nightmare Before Christmas Coffin Watch on your wrist. […]

With Halloween right around the corner, you better stock up on ghoulish treats like Gummi Brains and Gummi Hearts and use the Zombie Cookie Jar to hand out candies to the neighborhood kiddies.  But when the kids are fast asleep and the adults are ready […]