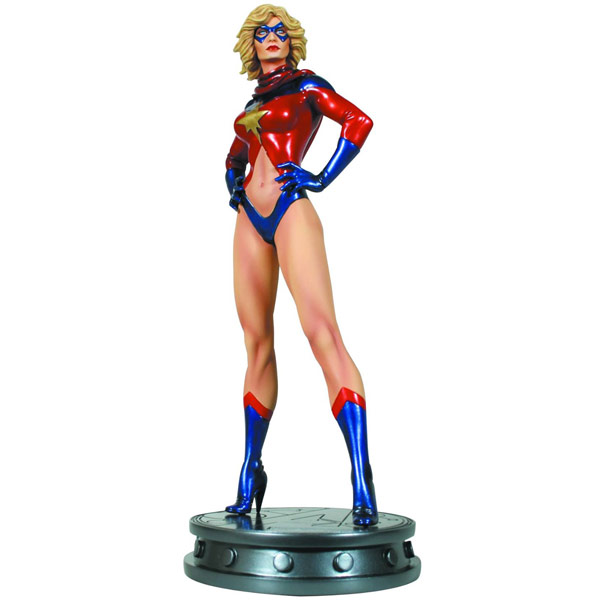 Ms Marvel is one of those characters that Marvel Comics never seemed to know what to do with, but the Bowen Designs 70’s Version Ms. Marvel Painted Statue reveals a retro-look for the character that played it safe while still managing to make the new hero work.

Forget getting bombarded by gamma rays or being bit by a radioactive spider. All Carol Danvers had to do was hook up with Captain Marvel (the dude with the star on his chest; not the lightning bolt), and she ended up some of his powers. Eventually, Carol slipped into a skimpy female-version of Captain Marvel’s outfit and started calling herself Ms. Marvel… just in case slow readers couldn’t pick up on the fact the new hero in red and blue was now a female. After that, things got weird and the character went through several reboots.

The 12.5-inch-tall statue, sculpted by Jason Smith, features Carol Danvers in her classic 1970s Captain Marvel-style uniform, showing way more skin than you think would be sensible when fighting crime but such was life in the wild 70s.

You are going to love this Star Wars ’70s Pattern Wristlet ladies. Not only is it nice and retro, but it is also lightweight and super-durable. It holds everything you need for a night out, whether going to the club or the cantina. It features […]

Yet another line of beautiful 1970s style watches is now available over at LED Watch Stop. The stainless steel watches comes with a leather band and the basic 24hr clock and date features. $80 each: Drivers 70s Style Retro Digital LED Watch – Red Drivers […]

Carol Danvers soars into the stars with the Captain Marvel Premium Format Figure, featuring two different looks for the former Ms. Marvel. Many heroes have called themselves Captain Marvel, even some arrogant kid over in the DC Universe, but none have been more worthy of […]

Shazam! Oh wait. Wrong character. The Captain Marvel Rock Candy Vinyl Figure brings a super-powered Carol Danvers to your Marvel collectibles… and she’s leaving the Ms. behind. When a scantily-clad Carol Danvers first burst into the superhero scene, she was Ms. Marvel but she got […]

The First Avenger gets stylish with the Captain America ARTFX+ Marvel Now Statue, with the iconic hero sporting a brand-new look. Based on Marvel Comics’ ‘Marvel Now’ version of the character, the highly-detailed 7 1/2-inch tall statue features Cap wearing an armored version of his […]

This Women of Marvel Now Coffee Mug holds so much girl power that you might not even need coffee to start your day. Standing 3 1/2-inches high and capable of holding 12 ounces of your favorite beverage, this eye-catching ceramic mug features some of the […]

The truly marvelous Carol Danvers strikes a pose among the stars with the Captain Marvel Premium Art Print. Artist Ian MacDonald created the out-of-this-world 18″ x 24″ print that features the former Ms. Marvel looking good while defending the universe in a uniform designed to […]